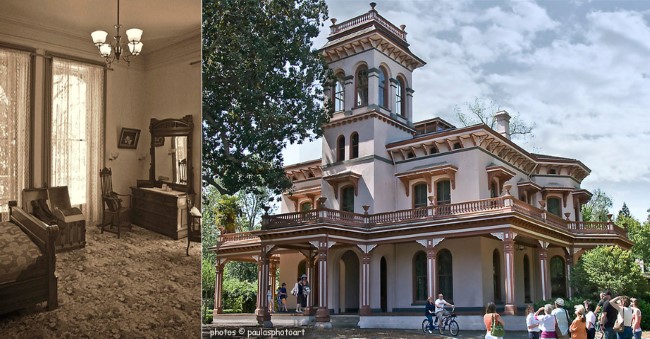 Photos above by Paula Schultz

While the Bidwell Mansion is described as Victorian, the overall style of the three-story brick structure is that of an Italian Villa. The building's exterior is finished with a pink tinted plaster making it the perfect backdrop for weddings.

John Bidwell had already begun work on his 26-room mansion on Rancho Chico before he met his soon-to-be wife, Annie. San Francisco architect Henry W. Cleaveland designed the house which was completed and ready to move into in 1868. Running water, flush toilets, modern gas lights and an air cooling system were luxuries not often seen in homes throughout California during this time.

Bidwell Mansion State Historic Park in Chico is not only a state landmark, but it also is one of the finest examples of Victorian homes in California. Significant for its history as the home of John Bidwell, known throughout California during the late 1800's. When John Bidwell galloped into Butte County on the heels of horse thieves back in 1847, he encountered a valley so pretty he was almost stopped in his tracks. Instead, he kept on going, caught the thieves, and turned them over to his boss, John Sutter, one of the known entrepreneurs of the California Gold Rush.

A year later Bidwell witnessed history when gold was discovered at Sutter's Mill in the Sierra; he turned prospector and made a fortune. But he never forgot the verdant valley he'd seen near Chico Creek, 90 miles north of Sacramento. By 1850 he traded his gold for 26,000 acres, planted wheat, and planned a new town.

Bidwell Mansion is a beautiful, three story, 26 room Victorian House Museum that stands as a memorial to the Bidwell family legacy. Recognized as an important pioneer, farmer, soldier, statesman, politician and philanthropist, John Bidwell was known throughout California and across the nation. John Bidwell, a progressive fellow, married Annie Ellicott Kennedy Bidwell, the daughter of a socially prominent, high ranking Washington official. Unlike her husband, Annie a staunch Christian committed to moral and social causes. Active in the suffrage and prohibition movements, Annie worked to remove alcoholic beverages and did not believe in dancing, among other things.

Among her contributions, Bidwell Park was established on July 20, 1905 through the donation by Annie Bidwell of approximately 2,500 acres of land to the City of Chico. Since that time, the City has purchased additional land, such as Cedar Grove in 1922, and 1,200 acres of land south of Big Chico Creek in Upper Park in 1995. Today, Bidwell Park size is 3,670 acres (nearly 11 miles in length), making it one of the largest municipal parks in the United States.

The Bidwell's were married April 16, 1868 in Washington, D.C. with then President Andrew Johnson and future President Ulysses S. Grant among the guests. Upon arrival in Chico, the Bidwell's used the Mansion extensively for entertainment of friends. Some of the guests that visited Bidwell Mansion were President Rutherford B. Hayes, General William T. Sherman, Susan B. Anthony, Frances Willard, Governor Stanford, John Muir, and Asa Gray.

When constructed, Bidwell Mansion featured the most modern plumbing, gas lighting and water systems. The overall style of the three-story brick structure is that of an Italian Villa. The building's exterior is finished with a pink tinted plaster.

Bidwell was one of the first Northern Californians to install an indoor toilet, a tidbit you discover during the tour of the mansion.

The ballroom upstairs never felt the step of waltzing feet, as Bidwell's wife, Annie, was a prohibitionist who did not believe in drinking liquor or dancing.

The irony that "the craziest campus in the nation" according to Playboy magazine, is located on the former Bidwell cherry orchard makes this property even more fascinating. A proponent of higher education, Bidwell donated eight acres of his cherry orchard in the 1880s for a teachers' college called Chico State Normal School. It became California State University, Chico.

Location – Directions
From Highway 99: after you take East First Avenue and go left onto The Esplanade, the Mansion is on your right (west).

The Bidwell Mansion Visitor Center is completely accessible. There is a gift shop, museum, theater and a lobby area.