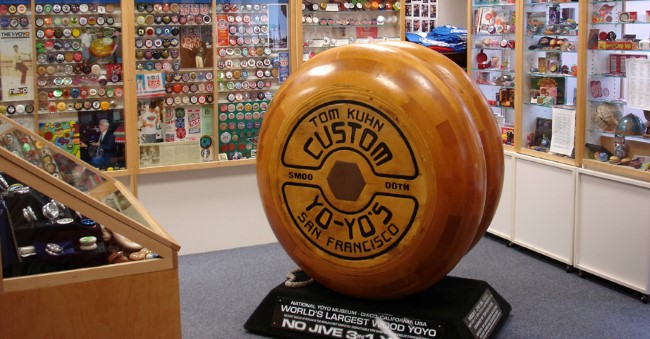 Ever try to spin a 256 pound yoyo! The world's largest Yo-yo can be seen at Chico's National Yo-Yo Museum. This Guinness Book of World Records beauty, a Big-Yo that actually works, was designed by Tom Kuhn. It is a No Jive 3 in 1, Smooth - San Francisco Custom Yo-Yo.

One of the many rare finds at the National YoYo Museum in Chico, be sure to make this a stop on your road trip. Vintage Terminators, Silver Bullets, SuperYO, and Samurais are on display at a place that is considered the epi-center of yoyo-ing.

Like other inventions such as A&W Root Beer made famous in Lodi but created by a pharmacist in Arizona, the popular Duncan yo-yo was based on a Filipino wood-carved toy importer Pedro Flores drew audiences and applause with.

Duncan purchased both the yo-yo concept and the Flores company to begin manufacturing a crazy, entertaining toy that created a craze during the 1930's. Nearly every boy wanted and purchased a yoyo to learn and show off new yoyo tricks.

Walking the Dog is still a favorite today. As an intro level exercise in controlling your yoyo, the trick actually looks like a dog on a leash, if you can use your imagination. There is a battery of yoyo tricks you better have mastered before entering a yoyo competition.

Yoyo tricks have their descriptive names, and so do the yoyo styles-- Yomega XBrain and the swift Yomega PowerBrain Wing with its piston-like 4-way synchronized clutch system that engages simultaneously make yoyo collecting and performing lots of fun.

Fluorescent colors and visible internal gears in see-through resin, these babies look somewhat like today's skate wheels. Prices are still affordable with a decent model to be had for around $10 and even the next step up costing on $15. If you purchase a full collection of yoyos you should plan to spend a couple hundred bucks. Here are few tricks:

Around the Corner : Cradles the string around your shoulder, then spins and returns back again.

Around The World: Throw the yoyo out from your body at an angle, then spin it on its string in a 360 degree circle, then return it back to your hand.