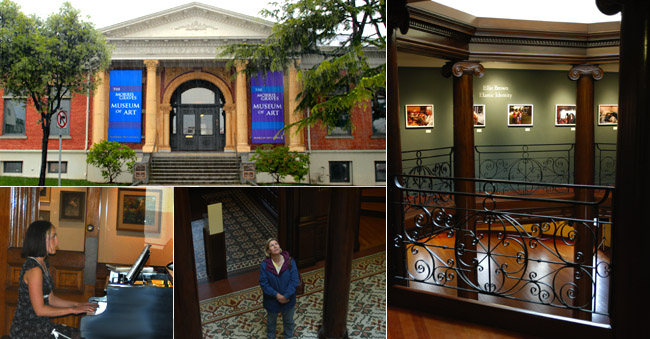 Morris Graves Museum of Art is worth a look for several reasons. Opened on January 1, 2000 in Eureka, California's Historic Carnegie Free Library building (1902,) the museum is an architectural delight and an art lover's chance to see works of a renowned expressionist painter who founded the Northwest School.

Humboldt Arts Council wore several hats when taking on a massive renovation project transforming a library building into an art museum. Fans of Carnegie Library buildings constructed throughout the United States in the early 20th century delight in efforts to save these structures—a mere fraction of them (around 144 were built in California through Andrew Carnegie grants, and 1,689 in the U.S.) are still standing today.

What's noteworthy about the Eureka building is the beautiful renovation of this Classical Revival style library. While Eureka is home to world-class wood craftsmen specializing in Victorian and classical styles, many turn of the century buildings in the city were constructed with local redwood which is known to last. Original local, whole, redwood pillars still stand in the foyer well over 100 years later!

It wasn't easy...when the City of Eureka challenged Humboldt Arts Council to undertake the effort to save the historic structure. The Council's fundraising arm was mighty, however, and completed the project for around $1.5 million through a campaign called "brick by brick".

The Carnegie building was designed by architects Knowles Evans and B.C. Tarver of Eureka. Its striking appearance features a red brick exterior contrasted with yellow tapered fans above the windows and Mad River granite lintels and sills. Eureka was the first city to finance a public library under California's 1878 Rogers Act.

Inside the building is a  colorful tile mosaic floor in the domed Rotunda. The crown jewel of the arts community has seven premier galleries; a young artists' academy; a performance rotunda for music, dance and the literary arts; and the administrative offices.

Art lovers get an opportunity to see some of the unique works of Morris Cole Graves (August 28, 1910 - May 5, 2001) in addition to featured exhibitions. The renowned American expressionist painter who founded the Northwest School traveled the globe but as luck would have it, decided to settle in his final home, "The Lake",  in nearby Loleta, Calif. Graves donated over 100 works from his personal collection several years before he died at age 90.

Thanks to the dynamic members of the Humboldt Arts Council the city of Eureka can proudly share a beautiful facility, entertainment and a variety of arts in one of the finest exhibition spaces on the West Coast.