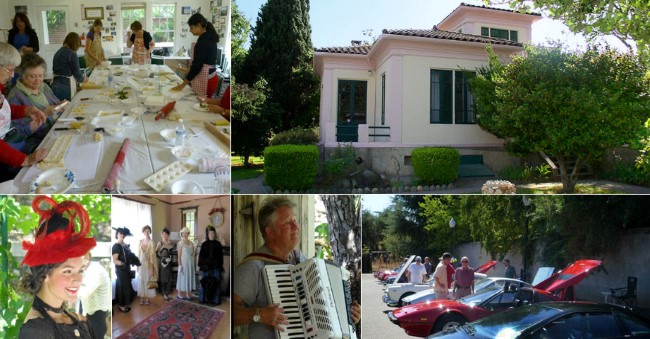 Joe Murer House is open for tours the first Saturday of every month. The museum is also open and located on the grounds next to the home.

Italian language, culture and food classes and special events in a beautiful and historic setting. Classes are held in the Murer House Learning Center, an 1890s house on the ground of the historic Giusppe Murer house. We also have an annual event to celebrate Folsom's Italian Sister City, Crespano del Grappa (Giuseppe's home town). Life in Crespano del Grappa Giuseppe (Joe) Murer was born in Crespano del Grappa, a small town about 30 miles east of Venice, Italy, on November 15, 1885. At the age of 12, he was apprenticed to Signore Giuseppe Melchiore as an apprentice in his carpentry and cabinet maker's studio. In this studio, Murer mastered cabinet making and finish work. After the San Francisco earthquake of April 12, 1906, news quickly spread to Italy of the plentiful work available for carpenters to come and rebuild the city. Murer, then 21 years old, decided overnight to go to California with three other young men from his Crespano del Grappa. After they found few jobs in San Francisco, Murer headed to Shasta County to find an uncle, who had immigrated to California in the 1880s. Joe Moves to Folsom, California After a few years, with money he had earned building small hotels, he came to Folsom. Once in Folsom, Murer became the proprietor of the New Western Hotel (now known as the Folsom Hotel) at 703 Sutter Street. He was joined by his nephew, Paulo Murer. Giuseppe Murer became an American citizen in 1913. Giuseppe Joe” became involved in the local community, developing long lasting ties. He served as Fire Chief of the Folsom Volunteer Fire Department and joined the Knights of Phythias in 1917. He was a 25-year member of the Folsom Aeries of the Eagles organization. He also served as President of the Portuguese Club, to his chagrin, after being asked to serve by his numerous Portuguese friends. He also organized two local groups. One was the Folsom Gun Club and the Folsom Marching Band, in which he played a trombone. The gun club was started with a number of other Folsom men he went deer hunting with in the mountains for a few weeks each fall. Among there were other well-respected local men, such as William Rumsey (who owned the local hardware store) and Colonel Pratt. The club was usually involved in shooting skeet or doves, which Murer cooked in a regional Italian sauce for large gatherings at the club. The club was located where the Young Wo Memorial Park is today. After World War II, Joe gave the property to Sacramento County for use as a Veterans of Foreign Wars hall. The Murer House Conception By 1921, Joe bought the site of the Murer House. He started building his personal residence there in 1925, basing its design on the architecture in his native Italy. His property was bounded on the west by dredge tailings. To retain these tailings, Murer constructed terraces using the river cobbles, nestling the house back into the pile to maximize yard and garden space. Joe designed the house and did all construction work, probably with the help of his nephew, Paul. Murer did all the interior wood work in the house, such as the pillared bookcases columns (identical to those in the Folsom Hotel today) and built-in hutches. 1927 a Pivotal Year When the house was near completion in 1927, he hired Antonio Zanetta, another Italian immigrant, to plaster the interior and install the tile roof. Zanetta, a native of the Piemonte region in northern Italy, went on to work with Joe on other projects again doing the plastering and tile roofing. Antonio worked along and Joe would usually find an assistant or laborer from the hotel to work with him. His son, Fred Zanetta, would become a builder in Folsom and lives here still today. His contribution to the Folsom Historical Society, Zanetta's Barn, sits behind the museum on Sutter Street today. Once the house, garage and workshop buildings were completed, Joe landscaped his property. The landscaping focused on fruit and nut trees (including an Italian staple, the chestnut), grapes and decorative ornamentlas, such as camellia and holly. Fruit trees included winter pear, bing cherry, apricot, pineapple guava, tnagerine, pomegranite, lemon and carob. Nuts included english walnut and hazelnut. Joe also built a grape arbor with six varietals fo concord grapes in the backyard. Giuseppe "Joe" Murer, The Builder Joe built many notable buildings on Sutter Street. After he bought the hotel in 1925, he stripped out the interior, which was run down after 40 years of continual use, and he did all interior wooodwork. Joe renamed it the Hotel Golden and then the Hotel Folsom. He then built the gas station and garage at 701 Sutter. He also built the Folsom Fire House across the street, which still stands between the Hacienda restaurant and American Visions gallery. He bought 705 Sutter Street and basically reconstructed it, tearing down the wood store front and replacing it with the detailed inset windows present today. In 1940, he built the Folsom post office at 627 Sutter Street, along with three offices/stores at 305, 307, and 309 Riley Street. Giuseppe ran the hotel and bar, as well as a liquor store in the gas station into the 1940s. During the war, he sold the hotel and sent the money to help family members in Crespano del Grappa, which was ravaged by Nazi aggression. The other properties he continued to own and operate for the rest of his life. Every year he gathered the spring asparagus, summer cherry, fall grape, and winter chestnut and walnut harvests at his home. Through all those years, he also had big steak dinners on the grounds of his house with fellow expatriated Italians from his region of Treviso, creating strong friendships with the Italian community in Sacramento. Joe passed away in November 1972 and is buried in St. John's Catholic Cemetery, just across Folsom Boulevard from his home.