Huntington Beach, CA--I could "wax on" for hours about how important it is for surfers to have traction on their boards so they don't slip but there's a cooler way to find out about the unbelievable world of surfboard wax--visit the new "History of Surfboard Wax" exhibit at the groovy HB International Surfing Museum, 411 Olive Ave.

There are more than 1,000 examples of surfboard wax and lore, including original waxes in their colorful and fun-named packages--"Sticky Fingers," "Honey Wax," "the Big Bar," "Sex Wax," and many off-color names and sexy photos that you'll have to see to believe. Even the shapes are different, i.e., Long Ryder's Surfwax is cleverly shaped like a surfboard. The museum shows off some surfboards with pretty scenes actually painted with wax. Don't miss the World's Largest Bar of Surf Wax, weighing over 100 pounds. The gift store sells waxes, including a special one honoring the International Surfing Museum's 25th Anniversary. You'll learn about several surf wax companies, see photos and samples of how it was made. Early businesses used motor oil to soften the wax. Surfers will tell you how bad the stuff stunk and it didn't taste good when you chomped on it. Now there's even a local Surf City Surf Wax. Like beer and other products, a lot of the waxes are made by the same company but have different labels. Whodathunkit?

In the first half of the 20th Century, surfers used parowax, floor wax, candle wax and canning wax to help them stay on the board. Surfers discovered paraffin, the first byproduct in refining crude oil to petroleum, could be used for traction. In 1964, a Redondo Beach company got credit for being the first to officially manufacture "Surf Wax." A year later, "Customized Surfing Wax" came out, featuring waxes for different conditions and temperatures.

The most popular wax scents over the years have been coconut, root beer and bubble gum. The least popular, pumpkin, pine and banana. There's a whole bunch of fascinating trivia about surf wax, including that a typical surfer buys about 13 bars a year, even though some borrow it from friends and strangers in the parking lots by the sea. The stuff can be valuable. A vintage bar of "Lightning Bolt" surf wax from the 1970s sold for $150! At the museum, you can even buy an incredible, illustrated book on everything you ever wanted to know, called, "Surfboard Wax." Plaudits to Museum Exhibits Director Dave Reynolds, Casey Mills, Zuma Jay, Dan McCoy and Docent Jeff Marsh for creating and explaining a very interesting display that you'll really enjoy. 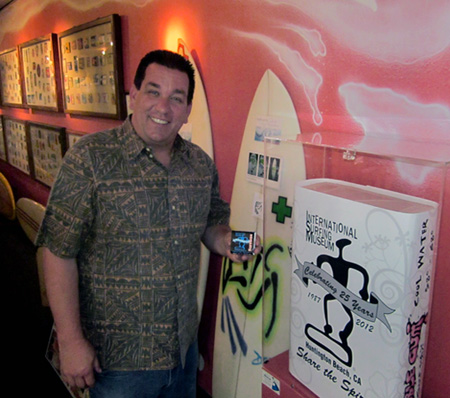 Take advantage of a fantastic deal and join the HB International Surfing Museum for only $25 to celebrate it's 25th Anniversary. You'll receive a Silver Anniversary Membership and special T-Shirt, neat mug and decal. You won't find a better deal helping this wonderful non-profit that explains what Surf City is all about. Pop into it today.