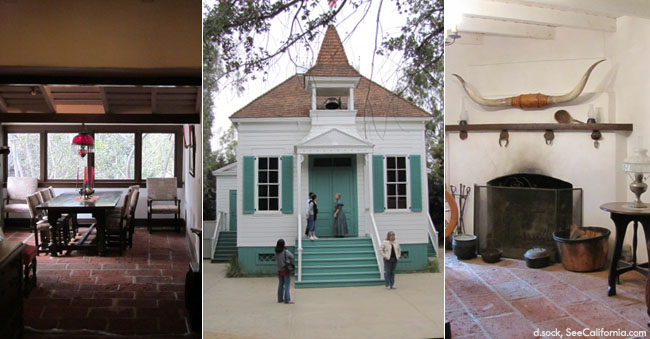 Heritage Hill in Lake Forest is operated by Orange County Parks. You'd never know this gem of a museum exists unless you're a local, or you come upon it by accident. Why? It sits in the back of a shopping center parking lot. While it lacks a grand entrance, it's fairly easy to find off the I-5 Freeway in Lake Forest (between Los Angeles and San Diego.)

Heritage Hill Historic Park rolls back the clock to a simpler time, where the county's early settlers were more accustomed to horses, sheep shearing, milking the cows and farming. Ditch your car and take a walk to see several historic buildings in shaded park setting on a hill where you'll even catch the scent of horses kept in nearby stables in the valley below.

The park began as the site of an historic adobe but grew to include historic buildings saved from bulldozing.

History: Rancho Canada de los Alisos was granted to Don Jose Serrano in 1841 and 1846 through the Mexican government. He and his family's  Serrano Adobe (CA State Historical Landmark No. 199) was sold and used by a number of families till it eventually was first restored by Dwight and George  Whiting  in 1932.

Next owned by Mr. and Mrs. V.P. Baker from 1958 to 1969, restoration continued as the Bakers re-furnished the house for use as a vacation home and meeting place for the Aliso Water Company.  The Bakers sold the 5,000 acre Baker Ranch to Occidental Petroleum in 1969 for $11 million dollars with stipulation that the Serrano Adobe be donated to a public agency for preservation.

Around the same time the Saddleback Area Historical Society came into being (1973) focusing their efforts on saving other historic structures from destruction as the old town of El Toro rapidly disappeared, transformed into housing tracts and shopping centers.

Open Wednesday through Sunday 9 a.m.-5 p.m. (subject to change) you can explore the free admission Heritage Hill Historic Park which contains Mexican Rancho era artifacts and buildings. Tours and admission are usually free except during events such as Fiesta Days or tour groups of more than 7 people.