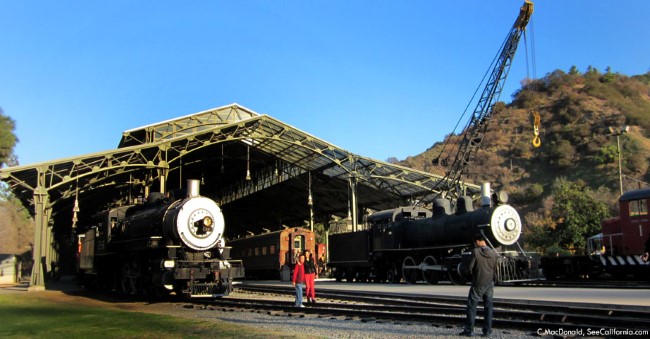 Travel Town Transportation Museum is located around the bend of the mountain behind the Los Angeles Zoo and Autry Museum of Western Heritage in Griffith Park. The museum includes interesting rail cars, trains, trolleys, memorabilia and antique vehicles housed in a large building and sitting in a mock rail yard. With emphasis on railroad heritage of the western United States and Southern California, the museum offers free admission and includes picnic areas, a small train ride around the perimeter of the grounds (small fee charged), a gift store, group tours by arrangement and party facilities for rent.

Originally conceived in the late 1940s as a fun place for children to go and explore a few old trains that were collected, Charley Atkins, a Los Angeles Recreation and Parks employee was able to launch a simple idea. But the concept was so popular, interest in the little park sparked a fire in others who began offering their train items, including train cars to the facility located on parks land. Opened in 1952, the Travel Town (train) museum has been around for 50 years now.

For those who don't know a Baldwin from a Pullman, you'll find the signage on the rail cars quite useful in describing the construction and origination of each antique engine or car. Some of them are open for children to climb on and two are available for hosting birthday parties on board (by arrangement). One of the oldest trains in the museum is a well-preserved 1864 Norris-Lancaster painted with black, red and green. A favorite for exploring and photographing, it was donated in 1953 by the Stockton Terminal & Eastern Railroad. With a Wheel Arrangement: 4-4-0 (American); Cylinders: 16" x 22" Driver Diameter: 63"; Weight: 33 tons; this is a real beauty!