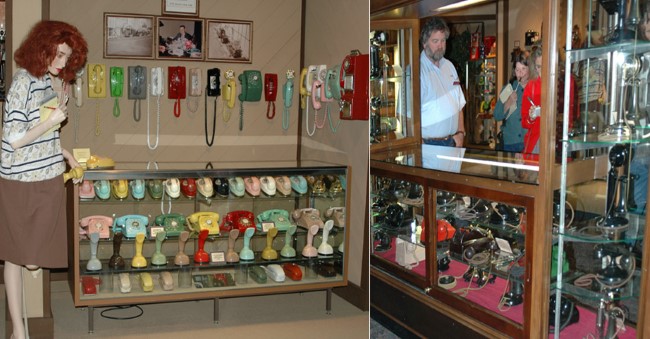 Roseville, California is home to not one but two fantastic museums. In addition to the Maidu Museum, one of our favorite Sacramento area museums is the Roseville Telephone Museum.

From the extensive collection of colored glass insulators such as the Brookfields dating from 1868 to 1922, to an amazing collection of telephones, the red brick museum owned by SureWest phone company includes several rooms filled with telephone equipment, photos and history.

California Landmark NO. 247 commemorates "THE WORLD'S FIRST LONG-DISTANCE TELEPHONE LINE". The first long-distance telephone in the world, built in 1877 by the Ridge Telephone Company, connected French Corral with French Lake, 58 miles away. It was operated by the Milton Mining

Company from a building on this site that had been erected about 1853.
Location: On Pleasant Valley Rd, in center of community of French Corral in Nevada County.