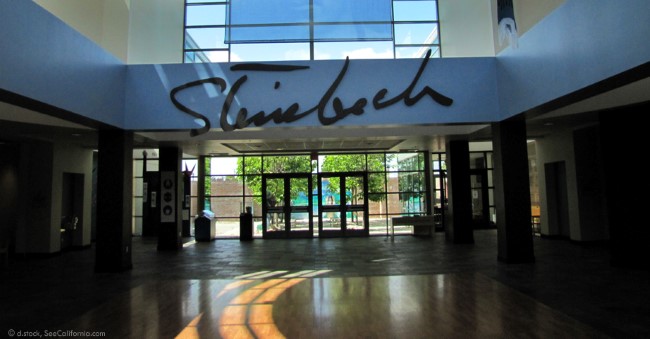 Nobel Prize recipient John Steinbeck is commemorated with an excellent museum in downtown Salinas. Located at the very end or start of Main Street, the building fits the neighborhood of early to mid 20th century buildings, even though it was actually built in 1998.

When you enter the open air lobby with sunlight filtered through the windows and stained glass that casts blue patterns of light on the wood flooring, all eyes are drawn to the huge script lettering on the wall above. It says "Steinbeck". There's no doubt that it's all about the famous author. Even as you pass the gift store to the left and pay your admission fee to begin your very own Steinbeck journey, you'll see his likeness in a life size statue of a man sitting in a chair with a book.

Steinbeck, who wrote novels set in the Monterey Bay and Salinas Valley region, is honored with a 37,000 square feet facility which contains permanent exhibits, a wing for special programs, museum store and a research room with a collections area of over 45,000 artifacts, manuscripts, historical documents and film archives. Scholars and researchers from around the world have found single point access to items relating to the prolific author.

Built at the historical center of Salinas on the end of South Main Street, initial funding for the National Steinbeck Center came from the Packard Foundation, a philanthropic organization based in Los Altos which also funded the internationally famous Monterey Aquarium.

An American author with an international following, John Steinbeck's books have been translated into over 30 languages. When he received the 1962 Nobel Prize for Literature, the Swedish academy noted, "His sympathies always go out to the oppressed, the misfits, and the distressed; he likes to contrast the simple joy of life with the brutal and cynical craving for money. But in him we find the American temperament also expressed in his great feeling for nature, for the tilled soil, the waste land, the mountains and the ocean coasts, all an inexhaustible source of inspiration to Steinbeck." The Steinbeck Collection began in the 1950s with the purchase of several of the author's first edition books. Donations received from family members include Elaine Steinbeck, Steinbeck's widow; Steinbeck's sisters, Elizabeth Steinbeck Ainsworth, and Esther Rodgers, and John Steinbeck's sons, Thom Steinbeck, and John Steinbeck IV. The collection continues to grow with generous donations from patrons around the world.
building

Inside the Center is a gift store, exhibit halls which include hands on displays, innovative graphics, big screens with movie excerpts and personal memorabilia from Steinbeck's life. Valley of the World―the name John Steinbeck gave to the Salinas Valley when describing it in East of Eden-is also the name of a new gallery at the National Steinbeck Center. The 6,500 square foot addition focuses on the human element and the technology of farming over time. It also includes personal items and artifacts related farming and the local faces of people who contribute to feeding the nation and the world.

The exhibit includes photographs and film footage of farm workers of all ethnicities, personal memorabilia including unique tools and clothes used throughout the decades and personal histories of Salinas Valley families that have worked in the industry. The $4.6 million addition is a welcomed addition to this already world class museum.