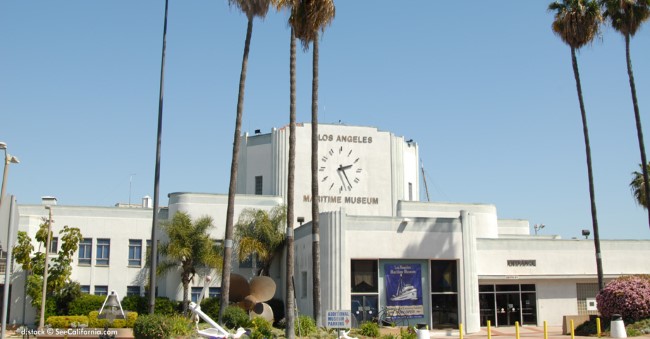 There are 10 great reasons to see California's hidden gem, the Los Angeles Maritime Museum. Fine out why you should go!

Three connected attractions greet guests to the Port of Los Angeles - Gateway Plaza. Fanfare Fountain, Red Car Electric Train rides, and Los Angeles Maritime Museum are all an easy stroll between each other, and make for an entertaining, kid-friendly visit to San Pedro.

The Maritime Museum is located in a Public Works Administration (WPA) "Streamlined Moderne" facility built in 1941 as the base for an auto ferry which crossed the channel at regular intervals from San Pedro to a sister building on Terminal Island. It served the Navy, fishing industry employees and travelers or commuters opting to avoid a long route through Wilmington and Long Beach. With the completion of the Vincent Thomas Bridge in 1963, ferry operations ceased and the building became an office for the Harbor Department.

The Los Angeles Maritime Museum is the largest maritime museum in California, containing 75,000 square feet of displays such as more than 700 ship and boat models, navigational equipment and an operating amateur radio station. Exhibits include Native American artifacts relating to the sea, ship figureheads, maritime arts and crafts and an 18-foot scale model of the Titanic. Historical exhibits of the whaling industry, tall ships, commercial shipping, the Navy, the Merchant Marine and recreational sailing.

Try your hand at tying any of the 64 types of seaman's knots on display and grab the wheel of a 19th-century sailing ship. Classes on include topics such as small boat handling and ship model building.