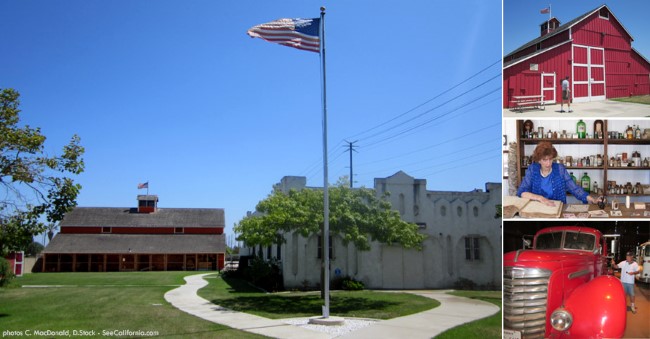 Having a Blast in the Past at Blakey Historical Park

WESTMINSTER, CA--Visit Blakey Historical Park in this North Orange County City on the first Sunday of any month and you'll be in for a real memorable treat as you venture into yesteryear.

Operated by the Westminster Historical Society, the fascinating place at 8612 Westminster Blvd., features the city's first Drug Store (1874), the Warne Family Barn and Farmhouse (1915), the magnificent former Midway City Women's Club (1929), a 1904 Windmill, Blacksmith Shop, antique Water Wagon, Fire Trucks and Ambulances, a One Horse Buggy and a Shutter Shak (one of approx. 20 remaining California Crazy buildings.) It looks like a camera but is 1,000 times bigger and houses old camera. There's also a flagpole from the former Marine Corps Air Station El Toro with a flag that flew over the US Capitol, and much more.

Inside the Women's Club building, which like many of the structures was rescued and moved to this site for preservation, is an impressive display of 31 exhibits. You can get an information sheet with numbers that enable a self-guided tour in this exquisite structure with a lovely wooden stage, where bands played during World War II USO Dances. Be sure and look up at the wooden ceiling--it's a work of art itself!

Put together by historians and society volunteers, the informative displays tell you the history of the Westminster area, including the Indian, Mission and Rancho Eras and how Westminster was founded as a colony in 1870 by Presbyterian Minister L.P. Webber, who sold land for $13 an acre to people of religious faith, high morals and interest in education.

There are exhibits on Little Saigon and the Zenith Aircraft Corporation (1925-32) which built planes, including a 7 passenger biplane used by Verm Speich to set a new solo endurance flight record of 39 hours without refueling!

Outside in the park, you'll see the McCoy-Hare House (1874), erected by Dr. James McCoy, the first physician in the colony. His sister, Martha, operated the store, which served customers into the early 1900s. Inside are glass bottles and tins that once housed Potassium Alum, Aspirin, Teapineol and other medicines. There's even a scrapbook of actual early-day prescriptions that's fun to see.
Later, this became the home of Orel (a blacksmith) and Marie Hare, a teacher in the Alamitos School District (who in 1956 was honored by having an intermediate school named after her in Garden Grove).

Near their home is a Blacksmith Shop where demonstrations take place. There's an anvil, scythe, grinding wheel, seeder planter and other items, many of which were donated by the Warne Family.

The Warne Family Barn and Farmhouse (1915) are a highlight at the Park. With high ceilings, the barn, which once housed cattle and horses, now catches the attention of school kids and other visitors with its 1939 GM Fire Truck, 1905 Buggy, and other vehicles. One of the main stars in the barn is an actual Rhode Island Red Chicken, which lays eggs, and illustrates to children that eggs don't "originate" in a store.

John Warne came from England, worked as a miner and farmer. He married Sarah and they had three children. You can still sense their presence when stepping into their home, which had no electricity or water. There's a curling iron, iron stove, chamber pot, wonderful antique bed, photos and Victor Music Box, where early records were played.

One of the best things about visiting Blakey Historical Park is the informative and friendly society volunteers like Joy Neugebauer, former Westminster Mayor and President of the Westminster Historical Society, and Harry Paul, a former aerospace quality expert, who's vice president of the society.

Thanks to Joy, Harry and other fantastic volunteers, they're able to preserve the history and bring it to life with their incredible knowledge and enthusiasm, which they pass on to their guests. We highly recommend you visit the museum and park, which is open from 1-4pm, the first Sunday of each month. To find out about the society's Ice Cream Socials, other activities and further information, call Joy on 714-893-0134. You'll be glad you did!