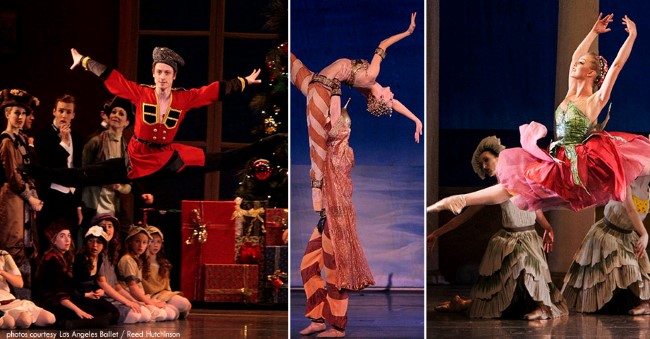 The Nutcracker - Los Angeles Ballet stays true to the traditions of the holiday story with some surprises! This production is set in 1912 Los Angeles. Throughout the five scenes in two acts you will find hints and tastes of Southern California - a Spanish style home, calla lilies, bougainvillea, the snowy forests of the Sierras, Venice archways, a moonlit Pacific Ocean and more!

Los Angeles Ballet's The Nutcracker is the city's own holiday tradition, perfect for celebrating the season. Set to Tchaikovsky's iconic score, you will be captivated as Clara and her beloved Nutcracker battle a most memorable Mouse King, encounter dancing Snowflakes and travel to the Palace of the Dolls.

Adding to the enchantment of The Nutcracker, LAB will perform again with the Los Angeles Ballet Orchestra at Dolby Theatre for four performances from December 20th through December 24th.

Cerritos Center for the Arts The Nutcracker

Los Angeles Ballet's celebrated original production of The Nutcracker returns. Follow Clara and her Nutcracker to the magical Land of Snow, and to the enchanted Palace of the Dolls where all of Clara's favorite companions come to life.

The Nutcracker again travels to multiple venues. Each weekend in December will feature evening and matinee performances at a different location.

The Nutcracker is a great showcase for principal dancers. An original production choreographed by Christensen and Neary set to Pyotr Ilyich Tchaikovsky's illustrious score, principal dancers reprise their role. Featuring sets with Los Angeles flair by LA designer Catherine Kanner and costumes originally designed by Mikael Melbye, The Nutcracker has become a staple for the city of Los Angeles.

The world of dance claims Mr. Christensen as one of its most respected citizens. Mr. Christensen danced with the Royal Danish Ballet, New York City Ballet and Pacific Northwest Ballet in major roles in the classical and modern repertoire. He was appointed artistic director of the Royal Danish Ballet and the Royal Danish Ballet School in 1999. During his leadership he advanced the company repertoire and school to new levels. In 2002, Mr. Christensen was appointed Knight of Dannebrog by Her Majesty Margrethe II. Colleen Neary is the Founding co-Artistic Director for Los Angeles Ballet. Ms. Neary danced as a soloist from 1969 to 1979 with New York City Ballet under the direction of George Balanchine. She had numerous roles created for her by George Balanchine, Peter Martins, Jacques d'Amboise and others. She was invited in 1979 to be Ballet Mistress and Choreographic Assistant for the Zurich Ballet. During this period she also staged Rudolf Nureyev's Don Quixote and Manfred for La Scala de Milan, Zurich Ballet and Vienna State Opera. In 1984 she was invited to be Principal Guest Artist and company teacher for Maurice Béjart's Ballet du XXičme Siecle where he created several roles for her. In 1986 she was invited to join Pacific Northwest Ballet as Principal Dancer. In 1992 she joined The Royal Danish Ballet as Ballet Mistress and company teacher. By 1999 she became First Ballet Mistress in charge of productions, a position she held until 2002. Ms. Neary is a member of the George Balanchine Trust and has staged many of his ballets, including Agon, The Four Temperaments, Theme and Variations, Rubies, Serenade, Tarantella, Stravinsky Violin Concerto, Divertimento no.15, Piano Concerto no. 2, Concerto Barocco, Tchaikovsky Pas de Deux, and Symphony in C, for leading companies around the world.

Since co-founding Los Angeles Ballet in 2006, Ms. Neary and Mr. Christensen have worked continuously to advance the company to one of the nation's most prestigious ballet companies by staging and choreographing increasingly difficult works, such as La Sylphide, The Nutcracker, Prodigal Son, Giselle, and now Swan Lake.