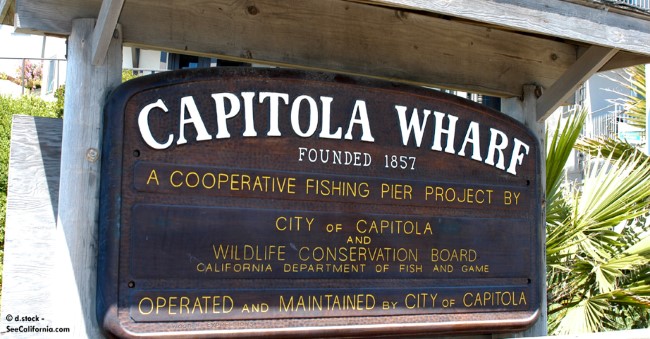 Capitola Wharf opens at sunrise, closes around 10:30 p.m. Has a gate that locks. City: Capitola by the Sea, California. Length= 855'

Capitola Wharf was founded in 1857. As a cooperative Fishing Pier Project by the City of Capitola and Wildlife Conservation Board with California Department of Fish and Game, the wharf provides free fishing opportunities, as do all public piers in California.

Within view of the pier is the river mouth to Soquel Creek, where the first pier was constructed prior to 1857. Produce, redwood lumber and livestock initially required shipping to the north to feed the California Gold Rush frenzy. Another wharf built by for the Pacific Coast Steamship Company was 1,100 feet long, but its construction was unable to withstand the storms that hit this coastal area from the Pacific Ocean. It was damaged and a portion was rebuilt. Santa Cruz-Watsonville narrow gauge railroad depot at nearby Soquel Landing created a faster method of shipping by rail, so the wharf was abandoned in 1879.

Diners enjoy a leisurely outdoor meal at the Wharf House restaurant. The wharf is located at the base of hill that contains some of the counties oldest condominiums and vacation homes. As diners gaze toward the ocean for an occasional view of migrating whales and dolphins passing through the Monterey Bay (a national marine sanctuary), surfers ply the waves that come ashore in Capitola, one of the region's favorite surfing destinations. Brightly colored Venetian Village cottages (rented as vacation units), are a landmark on the sand next to the wharf. And down below the wharf are kayaks for rent. Kayakers can launch the vessels from the wharf via a set of attached steps to a connected small platform where they are launched.

s. these cement columns contain viewing frames where information can be posted. Two large iron gate doors can close and are used to lock up the wharf and its facilities at night.

The wharf has a long history in Capitola. The current Capitola Wharf was constructed in the 1980's following storm damage as an 855-foot-long structure that contains a bait shop, restaurant, restroom facilities, bench seats to watch the ocean and free fishing, like all public piers in California. Fish cleaning stations and decorative lights adorn this pleasant-looking pier.

The name Capitola is Spanish for capital and was apparently first used by F.H. Hihn of Santa Cruz when he laid out a new resort in the area in 1869. The residents of Soquel had offered to let the State of California establish its capital in the upstairs rooms of Ned Porter's local store but California politicians (wisely) declined the offer. Hihn used that information when he named the site; it had been called La Playa de Soquel, the beach of Soquel, during Mexican rule, and Soquel Landing under American rule.

Capitola Wharf now serves as an anchor for the tourism industry and public's love of piers. Local passion over keeping and maintaining a wharf has required some effort. Funding sources to rebuild a weather-beaten structure were identified and this most beloved wharf 150 years or so in existence continues to inspire those who live in Capitola-by-the-Sea, or visit the beach community.