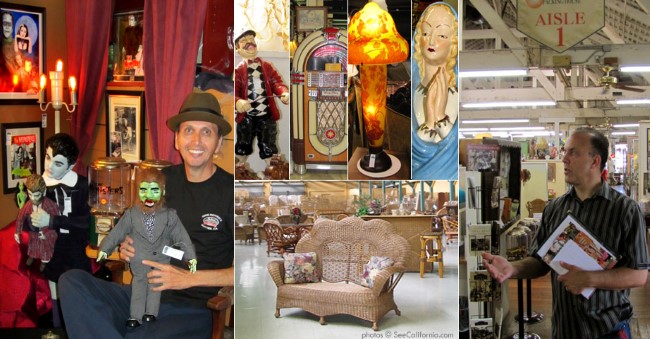 California's Largest Antique Center Has Wow & Everything Else

Whittier, CA-- What do a 22-foot long hotel bar, a milkshake-maker, a Shirley Temple Doll and the actual clothes Eddie Munster wore on his hit TV series have in common?

They all can be seen at Chuck and Martha Garcera's astonishing museum of antiques, collectibles and souvenirs from the past, better known as King Richard's Antique Center.
The largest business of its kind in California is housed in a beautiful 57,000-square-foot former citrus packing house, built 110 years ago.
The incredible place is not only an exciting museum with free admission but its nostalgic exhibits--supplied by more than 160 vendors--are for sale.

"On a Saturday, we may have 400 guests," said Chuck, a retired aerospace project manager, who owns the business. "Seventy percent of these folks are regulars. We've really noticed the younger generation getting involved in vintage collecting."

No wonder! You could spend hours, enjoyably wandering through the four levels, where some floors show off their spectacular original wood. Historical photos document the citrus being packed in the same building but today the structure seems to be chockfull of everything you can imagine, plus a whole lot more.

"Some of the hottest items aren't just antiques but newer things like our industrial art section with vintage lighting and our vintage-looking rattan, bamboo and wicker furniture," said Chuck, whose impressive business has been seen in several films, including Barter Kings and Past Due.

One of the most popular parts of the nostalgia factory is Munsters Store, featuring items from the hit 1960s TV show, including outfits Actor Butch Patrick (Eddie) wore, a prop jacket used by Herman Munster, autographed photos of the stars, Munster (baseball-type) Cards, Munster Comic Books, a teapot (with Certificate of Authenticity) used in the show, dolls of the stars and more.

A large screen constantly replays episodes from The Munsters series. Visitors walking nearby hear the popular TV show theme or Eddie Munster and his family's voices and flock to the store.

"Everyone smiles when they enter the room," said Don Boyer, a nationally-known motivational speaker and author, who owns the business with Patrick. "It takes many back to the fun times of their childhood."

Several times a year, Butch, who also starred in "Bonanza," "I Dream of Jeannie" and other shows, stops by to sign autographs and chat with fans from yesteryear.

On a room wall is a photo of Eddie Munster with a "Wolf Wolf" doll from the series. In the store, you can purchase one of 100 "Wolf Wolf" dolls created in recent years. "It's a real collectible because only 100 were made, then the mold was broken," Don explained.

The antiques center has so many fascinating items for sale that it's impossible to describe them all but here are a few of the things that might tickle your fancy: a stained glass door, candy vending machine, slot machines, 4 glass panel Chinese divider, unicycle, old-fashioned film projectors, gigantic commercial signs (i.e., "Taste a Legend—Bass Imported English Ale"), a shoeshine box, rare telephones, an Emmett Kelly Jr. Circus Train, numerous unique lamps of all shapes and sizes (one with an abacus as its base; another a woman harpist), a movie poster for Republic's ‘No Man's Woman," comic books, Victrola 78 RPM Record Player, furniture of every kind, vintage clothing, Fine China, English and American Silver, a barber chair and so very, very much more.

They also have on-site, a Jeweler, Clock Repair, a College of Appraisers and clean Rest Rooms. At the front desk, you also can purchase a fascinating map, "Native Son Richard Nixon's Southern California," which cleverly illustrates places and amazing details about the Whittier lawyer who became America's 37th President.
You've definitely need to check out the entire former Whittier Citrus Association Packing House to see just how incredible it is.

Friendly Manager Gloria Salazar, a former customer, has worked there 21 years. The entire staff is delightful. We can see why King Richards (named for an original owner over 30 years ago), should be a "must see" on your itinerary!