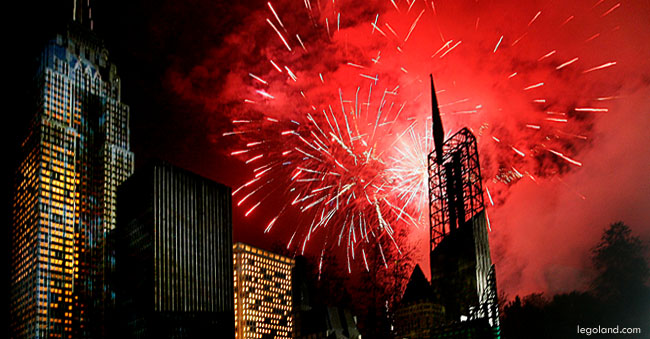 Legoland Brick Drop and Fireworks Show rings in the New Year early each year with a 6 p.m. celebration

Midnightť comes early for families at LEGOLAND California Resort celebrating the new year together without missing their bedtimes. LEGOLAND California re-creates the Times Square ball drop with a giant LEGO brick falling 22 feet in the air in San Diego's largest Kids' New Year's Eve Party! Join in the festivities with party hats and special glasses for viewing fireworks. The party concludes just in time for our countdown at 6 p.m. with a fireworks display illuminating the sky and providing a great ending to an amazing year.

Kids in California have things pretty rockin' good! They are treated to some of the activities that adults experience, such as the celebration of New Year's with fireworks and fantastic fanfare.

At Legoland California in Carlsbad children get to experience New Year's at an early 6 p.m. event that allows parents and kids to go home around 7 p.m. and do their normal stuff. Anyone with Legoland-age children knows they get cranky and want to sleep. Often they simply pass out in parents' arms or in the stroller while at a theme park. Legoland California is totally custom-catered for kids and plans every detail with them in mind.

The theme park's perfect client is a child just out of the stroller up to the age of 11 or 12. Of course anyone who loves Lego building blocks and making things is going to love the theme park, as well. But for New Year's Eve, Legoland California allows children a once in a lifetime memory.