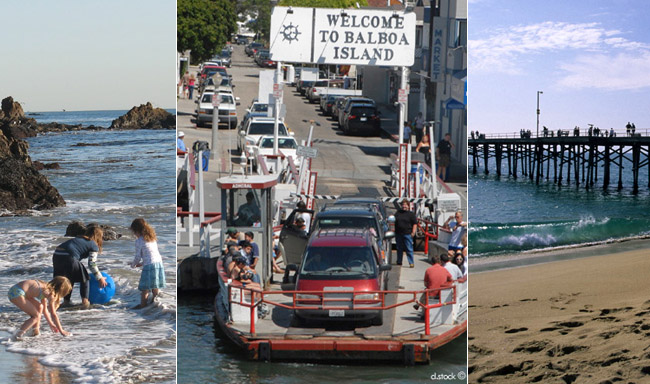 1. Newport Beach Beaches: Ten miles of diverse coastline begins on Newport Beach's north side with sandy Pacific Ocean beaches stretching from the Santa Ana River outlet to The Wedge on the Balboa Peninsula. Continuing south in Corona del Mar at the State Beach, enjoy sand and rocky coves ideal for tidepool watching. Finally, head further south to Newport Coast for Crystal Cove State Beach, known for its funky cottages you can rent by the week. The north beaches are flat, sandy and protected by jetties. Two piers flank these spectacular and popular destinations.  Two separate shopping areas along the city beaches are located by the two piers—Newport Pier and Balboa Pier. Restaurants, hotels and cafes are the mainstays of these much-filmed and visited locations. Among the international highlights is the spectacular WEDGE where bodyboarders go to meet incredible challenges. Corona del Mar State Beach features sand volleyball courts, tidepools and scenic views of the harbor.

2. Balboa Island: Balboa Island gained fame when the Hollywood set came to film the early black & white movies and comedies on location at this scenic spot.  Among its famous residents of days gone by was Buddy Ebsen, Jed Clampett of the Beverly Hillbillies. Take the Balboa Ferry to the Balboa Island from Balboa Fun Zone on the peninsula,  and head for Marine Avenue shops and dining.  There's a Starbucks, Mexican, Italian, Seafood, Chinese, Pizza, and a great variety of food options—mostly casual.

3. Newport's Piers: It is rare among California cities to find two piers in one place, and most coastal cities actually have no pier at all. Newport's two largest piers are Balboa Pier and Newport Pier, both with long histories of providing pleasure to visitors and locals throughout the decades. In addition, the city has around a dozen small public piers scattered along Balboa Peninsula and Balboa Island. These wooded piers serve as temporary mooring and free fishing locations.  The are strewn among the coastal landscape of private bay homes and are not to be confused with the neighboring private piers.  Public piers always have painted curbs or signs stating they are public. Only visit these public piers and do not walk onto any others surrounding them that are private.