Are You Ready To Take The New Year’s Plunge? One California Club Does it Every Day! 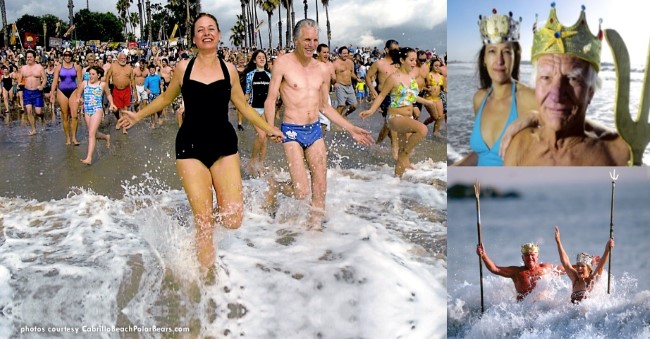 Though thousands of Californians and visitors take “the plunge” just once each year on New Year’s Day, running into the frosty Pacific Ocean where ocean temperatures usually range between 50 and 62 degrees on January 1st, The Cabrillo Beach Polar Bears swim daily in the ocean. They invite you to join in or attend on January 1, 2012 as they ring in the New Year with an annual ceremony and tradition–the crowning of the new Polar Bear King & Queen.

Though not the first club in California to launch the ocean swim craze (the first began in San Francisco where it is REALLY COLD on January 1, ) this group definitely has gusto. Members come in all ages and sizes, but they maintain a swim regimen throughout their lives into their senior years, encouraging others to swim for health.

We’re just getting starting on the Polar Bear swim list for 2012, but if you’re looking for a place to participate, here are a few of last season’s offerings.