Teddy Bear Mathematician Has 3,458 Bears in Collection – So Far! 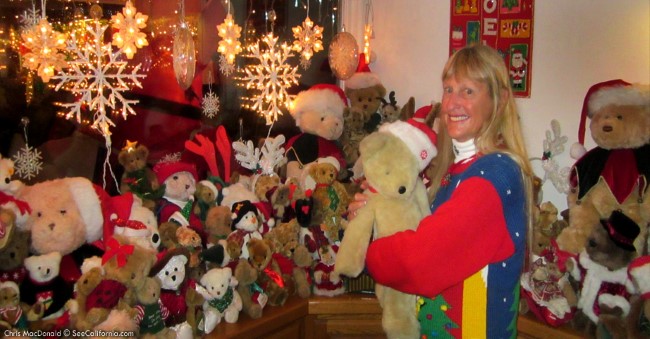 Balboa Island, Calif.-- Marcy Cook can remember how she first got started collecting bears. A friend invited her to touch and feel their newly purchased “Teddy” and when she held it, she thought it was nice. Having no particular connection or interest in collecting things till that point, she began buying stuffed bears that appealed to her and some 30 years later, the math teacher who instructs other math teachers, now has 3,458 stuffed bears in her collection.

Known for the Bayfront house with huge stuffed bears always looking out the windows of the 2-story home, tourists from around the globe are enamored when they get a glimpse of but a few bears in her collection. Just yesterday she received a singing Christmas Koala from “down under” from tourists who saw her bears in the windows and were so delighted that they had to send her an Aussie bear.

“I try to discourage people from giving me bears,” said Cook, who just finished the touches on her Christmas Bear and Lights Display, a Ring of Lights Winner in the annual Newport Beach Christmas Boat Parade home lighting tour. “People will come by and knock on our door with the saddest faces and stories, holding some special bear in hand and begging me to take it since they are old can no longer keep it. In special cases I will.”

BARE FACTS ABOUT THE BEARS: