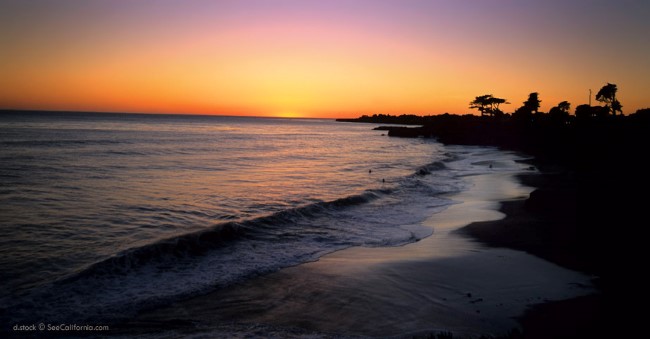 Pictured is sunset over the famous Steamer Lane, a well known surfing beach in Santa Cruz.

Surfers know that there’s a zone, both physically and mentally for surfing great waves. Santa Cruz, the birthplace of surfing in the USA, has officially by becoming a World Surfing Reserve, only one of 3 in existence. A ceremony will be held on April 28, 2012, officially establishing the Santa Cruz coastline that includes the city and County of Santa Cruz as the third iconic surfing location to be so enshrined following Malibu and Ericeira, Portugal.

The 7-mile stretch from Natural Bridges State Park on the western end to the Opal Cliffs just east of Pleasure Point contains one of the most pristine & robust coastal and marine ecosystems on the planet as part of the Monterey Bay Marine Sanctuary. A unique surf culture with a deep-rooted history of surfing in iconic spots at Steamer Lane and Pleasure Point (both world-renowned righthand pointbreaks) welcomes visitors with the Aloha spirit introduced to the mainland in July 1885 when three Hawaiian princes–David Kawananakoa, Edward Keliiahonui and Jonah Kuhio Kalaniana’ole–showed off their talents with long surfboards made of local redwoods, and milled in the shape of traditional Hawaiian o’lo boards, reserved in the Islands traditionally for royalty. Their uncle, King David Kalakaua, a renowned surfer at the long break along Waikiki Beach on the island of Oahu, had taught them to surf, and they now were displaying their abilities to vacationers and locals along the beaches of Santa Cruz.

Today surfing legends and innovators such as Santa Cruz’s Jack O’Neill say they get inspiration from those who introduced the sport which now encompasses the oceans of the globe.

“Throughout the world Santa Cruz is synonymous...read more>