Beyond the Casino - Pow Wows Offer Lessons in Earth Connections 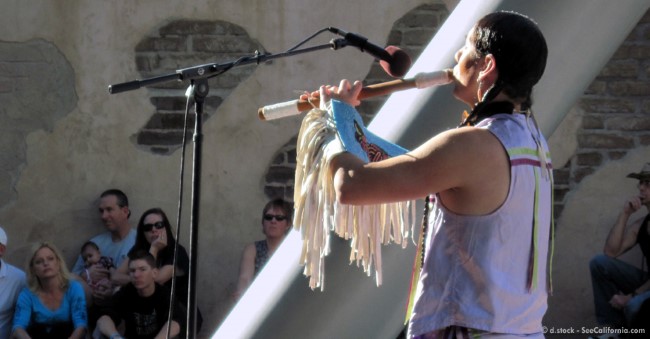 The Indigenous peoples of California are the tribes who have lived in the area for millennia (evidence of human occupation of California dates from at the very least 17,000 BCE.) With over one hundred federally recognized tribes, California has the largest Native American population and largest number of distinct tribes of any U.S. state. The local tribes are characterized by linguistic and cultural diversity.

Recent history and treatment of Natives by immigrants doesn't appear in school books, glossed over in favor of a sanitized version that includes the Spaniards arriving, Mexico taking over, and finally, California becoming a state in 1850. The population of Native California was reduced by 90% during the 19th century - from over 200,000 to approximate 15,000 at the end of the century - and goes down as one of the greatest decimations of an indigenous population in recorded history.

If you follow the trail to learn about native tribes, you would have to draw a flow chart to figure it all out and even then, many pieces of the puzzle would be missing. Today, we can connect with what remains of our natives' past through something more meaningful than a California casino (there are over 40 in the state,) by attending a Pow Wow. Though its fanfare, costumes and music may seem foreign to most of us non-natives, the songs, drumming, costumes and dances are colorful, compelling and even mesmerizing if you allow yourself get in the groove, so to speak.

Pow wow events are held throughout the year in California, and several take place in September in San Jacinto, Porterville, Bishop, Newhall, and Coarsegold. If you want to see some old-fashioned ideas such as praying and dancing for health and prosperity in action, the pow wow includes ceremonies that include these concepts. Food, vendors, contests with beautiful costumes, and even pageants are part of the celebration at pow wows in California. Throughout the year, you can find dozens of pow wows to attend. Go to at least one event and listen to the stories told through song and dance, that you'll find entertaining, if nothing else. Note: Knott's Berry Farm has provided regularly scheduled shows featuring Native Californians for many years. Check schedule at knotts.com