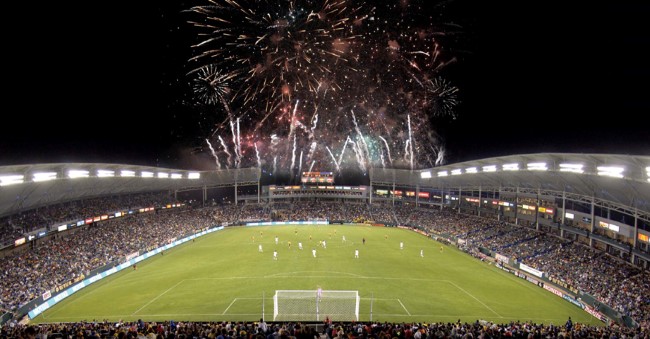 From a fireworks display at the Home Depot Center in Carson, Calif. (in photo) to 25 parades, thousands of events and millions of dollars spent on fireworks, California loves its 4th of July celebrations.

Pictured: 4th of July Fireworks Extravaganza at The Home Depot Center begins at 7:30 p.m., and includes hosts David Beckham and Landon Donovan as LA Galaxy takes on the Seattle Sounders FC on Monday, July 4, 2011. The first 10,000 fans in attendance receive a Galaxy t-shirt and all fans are treated to a post-game fireworks extravaganza. A pre-game concert features Iyaz with his hit single, "Replay", and there's a Cobi Jones Hall of Fame recognition event. Tickets to the match are available for as low as $25 at lagalaxy.com.

4th of July crept upon us so fast, and finally the alarm bells went off recently when a Los Angeles Parks & Beaches rep contacted SeeCalifornia.com about the cancellation of the popular 4th of July fireworks show this year in Marina del Rey, due to budget constraints. For fans of this event, don't look for it in 2011. There have been some fireworks cancellations (we're tweaking our calendar to weed out those) but for the most part it's a "go" throughout the state for parades, festivals and fireworks shows. From the biggest parade west of the Mississippi in Huntington Beach to a spectacular Pier 39 display in San Francisco, the annual 4th of July celebrations continue, full speed ahead.

While most cities in California have regulations about personal fireworks displays, our experience is that people continue to buy and ignite all sorts of fireworks- some legal, some not. By the time midnight strikes and 5th of July arrives, the air is filled with a sulphur smell and appears smoky in the night sky.

The largest manufacturer of fireworks in the world is China, though Californians purchase their fireworks from a variety of sources, including Mexico and even the United States. China (the country that invented fireworks) has used them for over 1,400 years, first to scare away evil spirits.

Fireworks have such a huge fan base that there are numerous fireworks conventions and expos around the globe with mega-firework displays. For companies that provide fireworks services to municipalities and events, attendance at the conventions is important for keeping up with the cutting edge products the public seeks.

The composition of fireworks that provide dazzling displays and sizzling sounds includes a bunch of chemical compounds that generally aren't healthy for humans when breathed in or when they fall into the water. Heavy metals, low concentration toxic chemicals and sulfur-coal compounds are released into the atmosphere when fireworks are ignited.

Studies to determine if fireworks are bad for the environment have included testing bodies of water before and after fireworks shows throughout several years of annual events. Perchlorate, a chemical harmful to humans in large concentrations, generally peaks in bodies of water (such as lakes) about 24 hours after 4th of July fireworks displays occur, with readings of up to 1,000 times higher than normal averages. The amount then decreases to the pre-fireworks background within 20 to 80 days. Especially harmful to pregnant women and babies, this chemical prevents absorption of sodium in the body.

California has become a leader in issuing alerts about perchlorate, though has taken no action in regulating use of fireworks as a source of water pollution. It turns out that the chemical already exceeds recommended limits in many cities' water supplies and as such, 4th of July fireworks would be a minor cause compared to other pollutants that persist.

Disneyland, one of Anaheim and Orange County's largest single polluters, has taken steps to lessen its footprint and is credited with fireworks technology that utilizes a compressed air launch system (instead of gun powder), revolutionizing the way fireworks are staged, the amount of pollutants entering the atmosphere and the quality of the show. An electronic timer sets off each firework once airborne. Created in 1999 in Florida, Disney holds at least seven patents, but has donated the technology to a nonprofit organization so these patents can be licensed to other pyrotechnic providers, helping to reduce pollution and create safer fireworks shows.

If you somehow manage to sleep through the 4th of July or are out of the country, Disneyland in Anaheim offers nightly fireworks shows throughout the summer. The displays are visible outside the theme park in certain locations so you can enjoy them without paying admission.