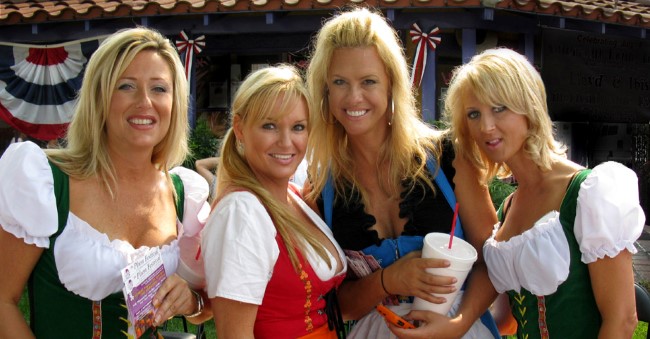 Shown are the "Sexy Shot Girls" who go out among events to promote Oktoberfest. In Huntington Beach, Calif., the girls face tough try-outs to become a pretty barmaid AKA "Shot Girl". In 2011, any woman over 21 years can try-out on August 10 and 17 at Old World Village Restaurant, Huntington Beach. Tryouts go from 6 to 9 p.m. With the fanfare of a beauty pageant, bring personality, skill, talent and a nice outfit won't hurt your chances either.

It's nearly that season for the reason to celebrate Oktoberfest in California. Eat, drink, be merry, and put on a little leather outfit with shorts and suspenders or a sexy dirndl that emphasizes a woman's best assets. While some Oktoberfest events in California charge fees, there are a few that offer free admission. Either way, count on German bands, bratwurst, beer, and meeting new friends.

From San Diego to San Francisco you'll find Oktoberfests offered in a variety of locations and styles. Ocean Beach Oktoberfest in San Diego is an annual tradition that can't shake its beach vibe. It feels sort of like Oktoberfest, but very much "OB".

Going up coast through Southern California there are three full time, non-stop German / Bavarian Villages that celebrate in a manner many would consider Oktoberfest all year long. However, the public doesn't know about their culture much and likes the marketing of an event called a "Fest" so that's when you'll see the crowds come out for annual Oktoberfests at Alpine Village in Torrance, Phoenix Club in Anaheim, and Old World German Village in Huntington Beach. These places host Oktoberfest events not for a day or two, but for weeks from September through October. None is our favorite-they each offer their own special flavor. And the 2nd Annual Long Beach Oktoberfest in El Dorado Park is picking up steam. It offers an affordable admission ($12-15) with free parking and unlimited rides on 17 carnival rides. It's really a fun event for all ages.

Central Coast has Oktoberfests, usually in Shell and Avila Beaches. In Avila they call it Oaktoberfest because of the oak trees that you'll see everywhere in this coastal region.

San Francisco Bay Area kicks up their heels with the mega Oktoberfest by the Bay at Pier 48. It's not your usual Oktoberfest, though nothing done is San Francisco is normal or usual. This event is unleashed during adult nights. Milder celebrations around the Bay Area happen annually in Campbell, San Jose, Millbrae and cities throughout the area.

Sacramento has a German Club and they like to celebrate Oktoberfest each year with a big shindig. Their events don't lack for party atmosphere, nor do the Gold Country Oktoberfest celebrations held in the Sierra Nevadas-Mammoth, Twain Harte, and other mountains such as San Bernardino's Big Bear Lake, where annual Oktoberfest is held weekends in September and October, and includes contests such as bier stein carrying and log sawing.