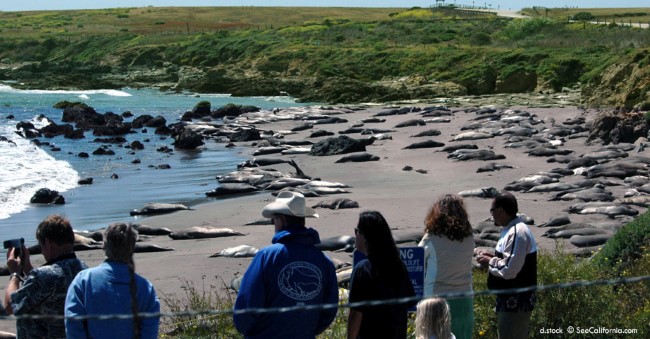 Pictured is the elephant seal rookery at Piedras Blancas north of Cambria.

As the harbor seals fulfill their annual cycle of mating, birthing pups and nurturing the young till they are old enough to head into the ocean and go it on their own, many residents and visitors to Carpinteria, a charming beach city in Santa Barbara County, actually look forward to the annual beach closure near Casitas Pier. The harbor seals pupping season from December 1 to May 31 offers a safe haven allowing harbor seals to birth and nourish their pups without disturbances. Extending 750 feet east & west at the base of Casitas Pier is an area closed to people and pets. Another seal rookery north of this location in San Luis Obispo County near Cambria, Piedras Blancas, is better known and also offers watching areas.

Harbor seals can be viewed from the top of the bluffs at the Carpinteria Seal Rookery Overlook, accessed from the Coastal Vista Trail. 28,724 visitors from 42 states and 43 countries came to watch the seal pups last year, according to volunteers who counted and the visitors and asked where they were from.

These same volunteers also act as stewards to the rookery area and last year stopped 34 people entering the off limits area. Posted signs and a potential $10,000 fine make entering the region less appealing. Like any wild animals, seals can charge humans and kill them with their strength and weight. 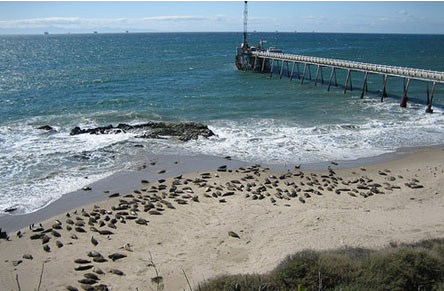 For seals, this is one of two beach visits during the year. The other visit is for molting or shedding skin. The adult animals come on to the beach in the winter with adult males arriving in late November or early December and vie for dominant position on the beach. Winners become the alpha males or beach masters–masters of their own universe, at least!

The males are followed by the adult females in mid-December to late January. As they come on the beach they become part of the harem controlled by only one of the alpha males. They give birth to their pup within a few days of their arrival on the beach and nurse for approx. four weeks. Toward the end of the nursing period females go into estrous and are bred, usually with the alpha bull although other males will attempt to mate as the opportunity arises. Shortly after the mating and at the end of the nursing period, the female will go back to sea.

The new pup whose mother has left, now called a weaner, will remain on the beach until most of the adults have departed and then utilize the shallow waters amid the rocks to frolic, to learn how to swim, and to develop his or her muscles before making their first trip to sea. This period may last up to two months.