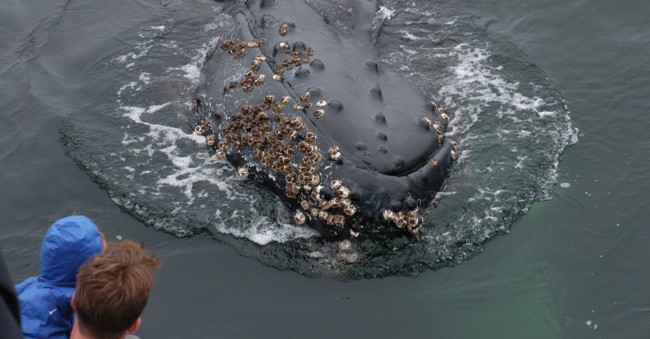 Pictured is father and son aboard a whale watching tour cruise in California.

You can go looking for whales and sometimes not see them along the California coast. But that’s not the case as we exit 2011 and head into what’s already promising to be a fantastic whale watching season. Reports of whale sightings this week are coming in from San Diego, Dana Point, Redondo Beach, Rancho Palos Verdes and Los Angeles bay where Cabrillo Marine Aquarium staff takes special interest in whale migrations.

One of the most exciting reports comes from Laguna Beach’s Shaws Cove where a juvenile Pacific gray whale sighting by a scuba diver has whale watching enthusiasts all a-twitter. The sightings have begun to surge off Southern California, just in time for the official start to the whale-watching season, though tour companies such as Newport Landing scoff at the concept that there’s a distinct season. They offer whale watching cruises all year long, and place daily sightings reports on a chalkboard outside their office and docks near Balboa Pavilion and the Fun Zone in Newport Beach.

Are there days when no whales can be seen? Sure. That can happen even during whale watching season, as I can attest, having been on one such cruise in Dana Point. There is no guarantee that you’ll see whales but that particular tour company gave everyone on the boat a rain check to come back again, even though it wasn’t their fault that the whales were feeding elsewhere.

Whale watching boats can be found in San Diego, Oceanside, Dana Point, Newport Beach, Long Beach, Redondo Beach, Santa Barbara, Oxnard, Ventura, Morro Bay, and San Francisco. We’ll be updating the 2012 spring whale watching opportunities & festivals (in Dana Point, Mendocino and Ranch Palos Verdes) soon, but meanwhile, if you want to go whale watching, you can do so now. There are vantage points along the coast (take binoculars with you to get better views) for people who don’t like to ride boats or don’t want to pay, and of course, you can see Wyland’s Whaling Wall life-size tributes throughout California any time, any day!