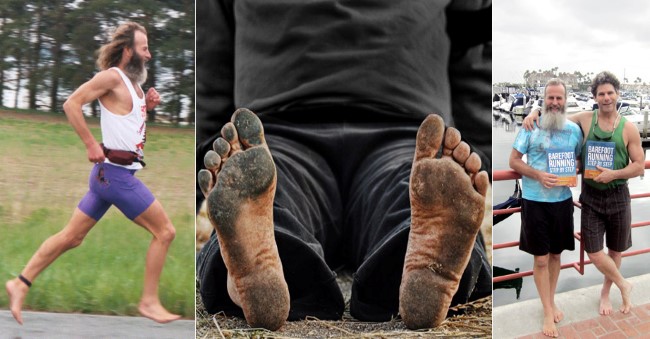 Running shoeless is becoming a rage and the man who has done more to promote its benefits through his website and a well-researched book, "Barefoot Running Step By Step," is Ken Bob Saxton of Huntington Beach. Known as "Barefoot Ken Bob," a veteran of over 76 marathons, Saxton turned to barefoot running over two decades ago when he got sick of the blisters caused by his running shoes. He actually tried his first marathon in Long Beach wearing shoes but the blisters became unbearable.

The Long Beach State grad, who works in the college's Computer Sciences Department, spends nearly all his time going barefoot, whether working, running, shopping or walking his dog. In 2006, he ran 16 marathons, including four in a 15-day period, all without foot problems. The friendly guy, who always has a twinkle in his eye, shares his barefoot knowledge with thousands of people around the world because he "wants to help people learn to run more safely." Last year, he drove 11,000 miles putting on 34 barefoot running workshops in 34 cities and 22 states, sharing experiences and explaining safer and better running techniques.

Sports Injury Bulletin out of London says up to 65% of all runners are injured each year. "There's an epidemic of injuries to runners and running barefoot correctly has helped cure foot problems," said Saxton, whose wife, Cathy, and dog, Herman, also run barefoot. Daniel Lieberman, Harvard Professor of Human Evolutionary Biology, says Saxton's book "is an invaluable guide for anyone who wants to run barefoot, avoid injury and have fun." Co-written by Los Angeles Times Fitness Columnist Roy M. Wallack, the fascinating book separates facts from hype, outlines Ken Bob's personal techniques, shares other barefoot runner's advice, includes the latest research & photos on the subject, and even has comments from anti-barefoot running spokespeople.

"Running is a lifelong sport if you run barefoot," said Saxton, 55. "One of the main tips is bending your knees-this is crucial for running stronger and avoiding injury. Even if you're standing or walking, bend your knees or at least unlock them so it turns your whole legs into springs."

He said one of the main injury problems to runners occurs from the way they land on their heels. "Feet are not heel strikers. You need to learn the proper form to run and the correct body mechanics. "It's important to pick up your feet faster," said the athlete, who reports that even all of the horses in the Houston Police Department's Mounted Patrol Unit have gone back to "barefoot" and have healthier "feet."

He said the barefoot value of staying injury free is nothing new for animals or people but there's even a study proving that barefooting can make you faster. To find out more, go to TheRunningBarefoot.com, get "Barefoot Running Step By Step (fairwindspress.com)" or join Barefoot Ken Bob for conversation and a short run-he takes off from the circle at the north end of Bolsa Chica State Beach, near Warner Ave. and Pacific Coast Highway in Sunset Beach (usually) every Tuesday and Thursday night at 6. It's all free and the information you learn from the guru may change your life.