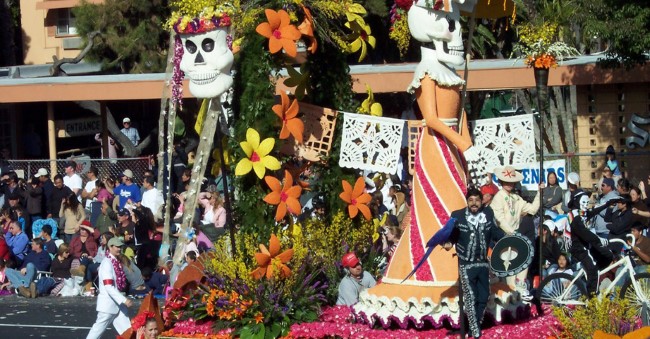 Pictured is Raul Rodriguez in the Tournament of Roses, Rose Parade, riding with his Hyacinth Macaw.

When the massive, regal floats roll down the streets of Pasadena January 1st to launch the momentous year 2012, you’ll be seeing inspired designs of the Rose Parade’s most famous float creator along the way. Be sure to wave when Raul Rodriguez, the guy with the Blue Hyacinth Macaw, Sebastian, passes by. He’ll be riding on the China Airlines Float, one of his 11 design that will appear in the parade, themed “BUILDING DREAMS, FRIENDSHIPS, AND MEMORIES”.

Raul was destined to be an artist as a kid. His creative talents began to show at the age of 15 when he won a contest and his design was accepted for a Tournament of Roses – Rose Parade float. He obtained a formal education, but his talents couldn’t be contained as he studied and earned a degree at Cal State Long Beach. He has won more float design awards than any person in the 100+ year history of the Rose Parade! (raulrodriguez.com)

Raul Rodriguez 2012 Floats in order of appearance in parade: