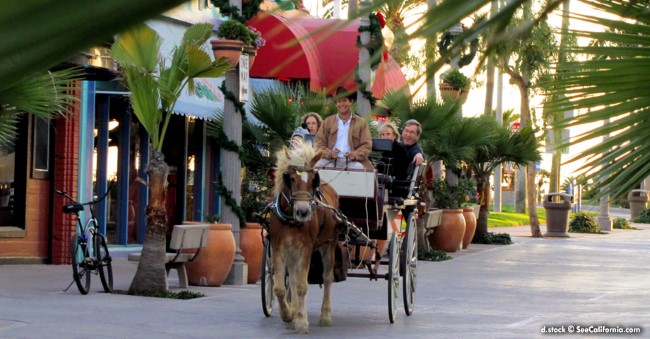 From the village that brings Californians the Newport Beach Christmas Boat Parade on December 14-18, 2011 and daily trips to Catalina Island via Catalina Flyer, last night I experienced something I thought I would never see–horse drawn carriage rides offered free. Anyone who wanted to celebrate the holidays in Balboa Village, part of the City of Newport Beach was invited to attend the new holiday event launched this year. The Balboa Village Business Improvement District hosted a holiday tree lighting with a tree and menorah, Santa visits, Christmas Carols, and free carriages rides with a fine horse and carriage supplied by Carriage Occasion (carriageoccasion.com) based in San Diego County.

Surfers, bicyclists and skateboarders made way for the horse drawn carriage that looped around the strand next to Balboa Pier where the first Ruby’s Diner was established back in 1982. As the carriage crossed over Balboa Blvd. on Main, turning just before it reached the famed Balboa Pavilion, cars waited kindly and in amazement at a sight not seen probably for over 100 years!

Chilly temperatures in the low 60s and the clip clop sound of the horse’s hooves on the streets of Newport Beach made for a truly old-fashioned Christmas at the beach. What a treat! Thanks to Mayor Michael Henn, who donated $500 for the tree; Ralph Rodheim, a boat rental company owner who operates boat rentals in Newport Beach, Marina del Rey, Long Beach, and Arizona, who led the activities; Nancy Gardner, the upcoming mayor of Newport Beach in 2012 who represented the city at the event; and Rita Stenlund of Newport Harbor Nautical Museum, who hosted an open house at the Museum next to the plaza where the tree lighting and carriage rides took place.