I AM West Hollywood Tourist Ambassadors 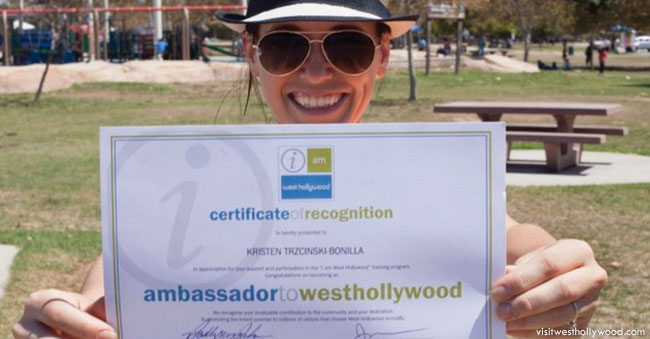 WEST HOLLYWOOD (WeHo), CALIF. — As the city prepares for the biggest Halloween party in the nation (West Hollywood Carnaval), it’s not just another day in West Hollywood–or is it? A new program turns bus drivers, hotel clerks, ticket takers, soda servers and anyone dealing with tourists into ambassadors to help answer questions, find solutions, and be a friendly greeter to the city so that people will love it and want to return. Known for its edge, WeHo’s notorious Sunset Strip with famous bars & clubs–The Roxy, Whisky a Go Go, The Viper Room, Comedy Store, House of Blues and Troubadour –mostly remain, attracting a nightclub crowd that sticks around in local hotels after partying and drinking. But it also attracts families in town to see Hollywood attractions, celebrities attending the latest premier parties and professionals working in entertainment industries. West Hollywood greets an estimated 3 million visitors annually.

A 2.5 hour interactive program, I Am West Hollywood, launched in 2013 for anyone interfacing with tourists. Each training session begins with a driving tour of West Hollywood on the WeHo PickUp trolley. Trained individuals become Official Information Ambassadors armed with a database of facts, figures, and ‘Did You Know’ anecdotes about West Hollywood for use in customer interaction.

Other destinations in California that have launched similar programs include Anaheim, Sonoma County and Stockton. According to the national Certified Tourism Ambassador organization, training increases product knowledge, creates a competitive advantage, provides branding, a consistent message and community alignment.