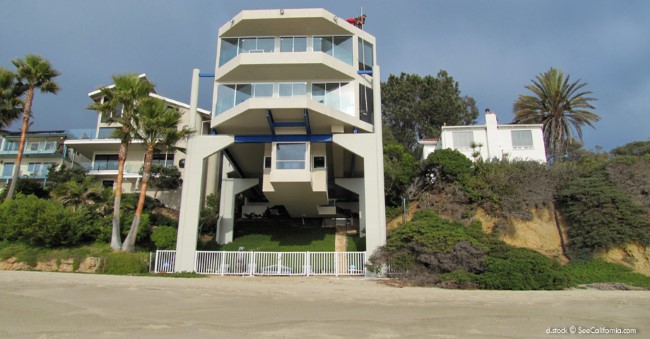 Pictured is a Laguna Beach house for sale. Window cleaners are shown standing on the roof top with a long squeegee, bent over to clean exterior windows.

I never knew who owned this unusual Laguna Beach sand fortress but it was no surprise when I saw that the father of cosmetic surgery, Dr. Klein, had his home up for sale and it happens to be the very home I often gaze at in wonder as I wander the treasured beaches of Laguna Beach. The public is free to enjoy the sand “beneath” this gated home perched above sea and sporting ocean views from nearly every room. The house is for sale and the asking price as of this posting is around $12 million for 3,572-square-feet of privacy and perks such as forever ocean views.

Dr. Arnold William Klein, renowned cosmetic dermatologist whose patient list has included Elizabeth Taylor, Michael Jackson, Cher, Dolly Parton and other celebs, is asking $12 million for the sleek, 3,572-square-foot modern design that boasts a substantial level of privacy to go along with unobstructed ocean views. Dr. Klein came under the spotlight as Michael Jackson’s dermatologist, especially after Jackson became a father. When Klein was asked if he was the biological father of Jackson’s kids, Prince Michael and Paris, the doctor acknowledged that he made several sperm bank donations but said he didn’t know if any of the children were the result of such donations.

The Laguna Beach “McMansion” is located south of the ritzy Montage Resort along the public beach, Treasure Island. It is the southern most city beach guarded by the Laguna Beach Lifeguard Department and is located just north of of Aliso Creek outlet.

The front of the house is functional with a contemporary motor court. Inside, the views steal the show! There are spectacular views of the Pacific Ocean from most rooms, including a spacious bedroom. The 3-story, 2-car garage home has 3 bedrooms and 4 baths, and was built in 1971. The home is set into a hill and the lot is 0.19 acres. Keller Williams World Media is the listing agent. 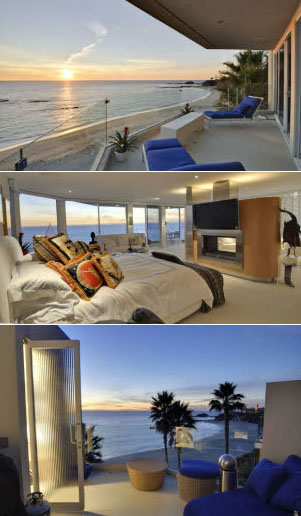