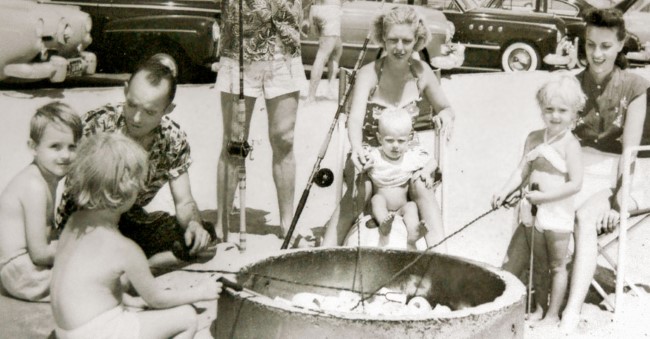 The bonfires are blazing as Labor Day approaches, signaling the end to another summer in California. A sure-fire spot to light your fire includes some beaches in California-spanning the Redwood Coast to San Diego County. Like beaches, the campgrounds have differing policies on fires so you need to check first with the local authorities before heading out for your "final hurrah" or adventure in 2011. (Bonfires don't end on Labor Day Weekend, but summer vacations do.)

Beach bonfires in California have been around for thousands of years-you're not coming up with anything new when you successfully light your fire and enjoy the primal sensations that earlier civilizations often took for granted. In fact, evidence of cooked food goes back 1.9 million years and most those meals weren't cooked over an electric stove or gas range. They were cooked over open fires outdoors.

In California, the modern day bonfire is a recreational activity that sprang out of the black & white film era when everyone bought one of those fantastic automobiles and suddenly could drive, stay in motels on vacations, and still do old-fashioned things such as build a bonfire. It's funny how we've become so civilized, yet we still long for simple pleasures connecting us with nature!

Many have no idea how to build a bonfire when they go to the beach. If they plan ahead, they realize they will need wood and matches to get the fire going. Those who have had camping experiences or have participated in scouting adventures as kids know bonfire essentials, and it's good to have them around when you try to build a fire.

A little bit of theory may help explain the fire's science-how and why it works.

The fire tetrahedron requires a flammable and or a combustible material such as paper or wood, in combination with an oxidizer such as oxygen gas or another oxygen-rich compound, exposed to a source of heat or ambient temperature above the flash point for the fuel/oxidizer mix. The rate of rapid oxidation must be hot enough to produce a chain reaction called the fire tetrahedron. In simple terms, you can try to light a match to a big log, but it's probably not going to catch on fire. To create the flashpoint, bring some starter item such as smaller pieces of wood (kindling, our favorite method,) or other items such as a starter log you must buy (too expensive to waste on a bonfire,) small pieces of paper underneath the logs with room for air to circulate, and some even use their charcoal lighter fluid to get the fire going.

Once your logs are burning, they go pretty fast. Most bundles of wood sold in stores or at beaches last no more than an hour unless you nurse your fire along. Don't dump the entire bundle into the pit, or you'll have a fast burn and nothing left to keep you warm as the cool air sets in later.

While the fire keeps you warm, it can also be used for cooking food. Beach and camping favorites include hot dogs cooked on sticks, marshmallows cooked over the fire, and a dessert treat called s'mores (because you want "some more".) Be sure to purchase a bag of marshmallows, graham crackers, and thin, sweet chocolate bars ranging from Hershey's to gourmet. You cook the marshmallow on the stick, then quickly slap it into the center of the sandwich made with graham crackers as your "bread" and chocolate inside. The hot marshmallow melts the chocolate and you get a tasty treat.

Many forget the cooking sticks or wires that are required to make this all happen. We've used coat hangers over the years, though special bonfire utensils are sold and you can use them again and again.

So, this Labor Day Weekend you can head for blazing hot Black Rock Desert, Nevada to gather around the massive bonfire and watch Burning Man effigy go up in a blaze of glory. Temperatures will range from 100 to 112 degrees during the day (burningman.com). We would rather head for a cool California beach where the daytime high will likely be no more than 80 degrees. When the sun goes down and you put on a jacket, the bonfire feels mighty nice!