To Sunblock or Not? That's the Burning Question 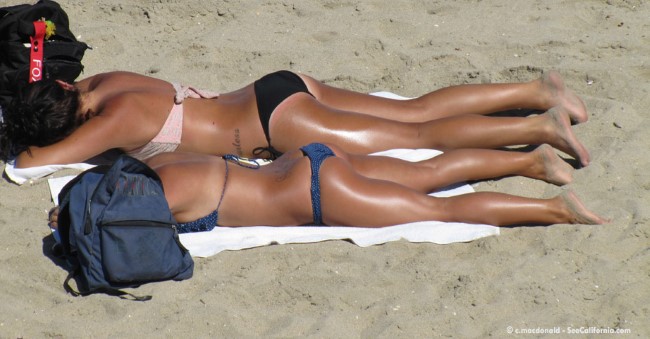 When you head out to the amazing, outdoor events in California this weekend, and you pull out that bottle of sunblock, rubbing it generously over your body, check out the ingredients. If the lotion contains oxybenzone, benzophenone, octocrylene, or octyl methoxycinnamate, all linked to increased risks of malignant melanoma, a rarer but more deadly form of skin cancer, it's hard to figure out if you should you wear the lotion? Pictured is a scene from the beach this week in California.

To sunblock or not? That's the burning question.

While sunblock ointments are promoted by dermatologists because they are known to protect against two common forms of skin cancer, squamous cell carcinoma (SCC) and basal cell carcinoma (BCC), the Centers for Disease Control (CDC) recommend getting a little sun exposure for vitamin D production, but not too much.

When you buy lotions to block harmful rays, SPF ( sun protection factor,) indicates protection against the ultraviolet B (UVB) rays that cause sunburn. Imagine that your skin normally begins to burn after 10 minutes in full sun without any protection. A 30 SPF sunscreen provides 30 times the protection of no sunscreen.

That means 30 times longer before you start to burn, or in this case, 300 minutes. That's five hours. Even if the sunscreen has an SPF of 100, chemists say it needs to be reapplied to provide optimal protection.

Another factor to consider is protection from UVA rays. These might not cause a visible sunburn, but they can still damage tissue and cause wrinkles, and they penetrate deeper into the skin than UVB rays.

The CDC says that UV rays cause 60 to 90% of melanomas, the most dangerous type of skin cancer. 66% of people between age 15 and 29 admit to at getting least one serious sunburn in the previous summer, and millions of people use tanning beds every year, even though the CDC says their UV rays are just as dangerous as UV from the sun.

Suntan lotions are big business! Ron Rice, the Suntan King, founded Hawaiian Tropic, one of the best known suntan products. Rice said he grew up in a log cabin in the mountains of North Carolina, where as a kid he ran a roadside stand selling apples, walnuts, honey, Christmas wreaths, and whatever else he could sell. He went on to graduate from the University of Tennessee and then worked as a chemistry teacher and football coach in Florida for $4,300/year.

While working as a lifeguard, Rice got the idea to create what would become Hawaiian Tropic sun tan lotion. He said he mixed his exotic concoction of oils in a 20-gal garbage can, using a cut off broom stick to stir his homemade brew. Rice began selling his product in the mid-60s and within seven years had sold a million dollars worth. He eventually built Hawaiian Tropic into a company with more than $200 million/year in sales when he sold it.

Elizabeth Plourde of Irvine, Calif. has written a book about NOT using sunblocks and suncreens (sunscreensbiohazard.com). She says that they are biohazards and should be treated as hazardous wastes. The Clinical Laboratory Scientist (C.L.S.) with degrees in both Biological Science and Psychology focuses her attention on the hazards of sunscreens and how they are impacting our children and the environment.

She says the chemicals in many sunblock lotions make boys breasts larger, among other things. Her information brings to light what has been proven in studies for decades regarding the harm sunscreen chemicals cause. She has appeared on ABC's 20/20, Good Morning America and other shows to promote the concept of avoiding most sunscreens and sunblocks.

We have been told the sun is harmful and we need to protect our skin from its rays. Yet, the chemicals used in some sunscreens are not only more harmful to us than the sun, they are harmful to all water life that are bathed in the washed off sunscreens.

So what should the average person do when putting on the sunblock to protect themselves and their families? The best answer is to choose your sunscreen product wisely.