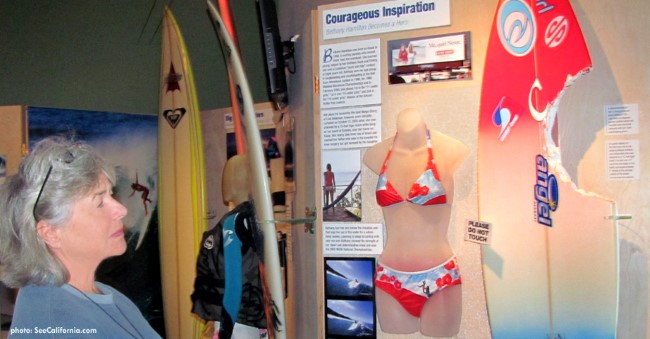 California Surf Museum co-founder Jane Schmauss finds inspiration from the likes of a rising surf champ, Bethany Hamilton, who survived a shark attack in Hawaii at the age of 13.

Oceanside, California-When you stand and look at the bite mark from a 15-foot tiger shark that ate Bethany Hamilton's surfboard and also her arm, you can't help but be in awe of this young surfing talent who survived after nearly bleeding to death, and was back in the ocean three weeks after she lost a limb.

From a display with the two-piece swimsuit Hamilton wore when she was attacked, to the swimwear, surfboards and stories about the amazing women of surfing throughout the decades, the exhibits on display at Oceanside's California Surfing Museum range from impressive to complete inspiration. "Women On Waves" is the definitive exhibition and best compilation of female-focused surf artifacts ever presented in one show.

"We spent almost a year researching, contacting and collecting the needed items for this exhibit" said Jane Schmauss, who co-founded the California Surfing Museum nearly 25 years ago. The former school teacher has a passion for chronicling surfing so the collections and stories don't disappear to current and future generations.

Bethany Hamilton's story is one example of the obstacles women and girls have courageously encountered and overcome on paths to becoming surf legends. Hamilton was born in Kauai in 1990 and won her first surfing contest at the age of 8. She continued to win contest after contest, and was on the path to becoming a surfing star. While lying on her board at Tunnels near her island home, Hamilton was unexpectedly, brutally attacked. Her father was in the hospital for knee surgery when Bethany was brought into the same facility for emergency surgery to save her life.

Her story is one of many inspirational vignettes showcased at this world class exhibit not far from the Oceanside Pier. WOW - Women On Waves spans the 1700s to current surf movement in an exciting exploration into the many aspects of feminine wave-riding. From the Hawaiian surfing Queens to the freshly crowned champions of the women's pro tour, Women On Waves celebrates more than 300 years of women's standout performances in surfing. At the same time Women On Waves chronicles the captivating beach fashions women endured or created, the milestones they accomplished and the often-overlooked influence feminine mystique has had on wave-riding.