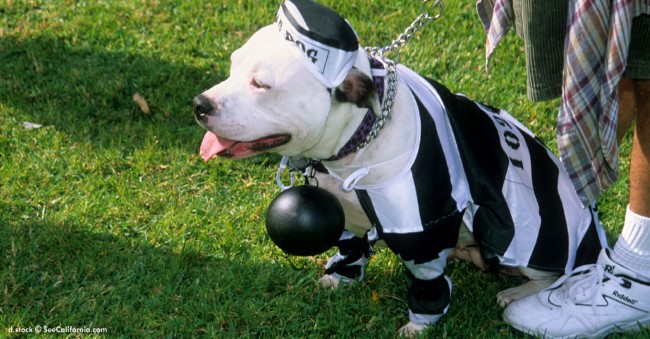 There’s not a bad costume when you stick it on a dog. But the truth is there are costumes that can help you win contests. This off-the-shelf ensemble isn’t couture, but it does really match the dog’s fur and personality. We give it 4 stars out of 5. With a few touches such as an added black eye, this pet would have won the contest it placed 3rd in.

The pet industry continues to grow by leaps and bounds, and if the economy is hurting, you’d not know it by the way pampered pets are treated better than kids. There are blessing of the pet events, surfing contests for dogs, and the annual Halloween pet parades, with the biggest being in Long Beach, California. In 2011 Justin Rudd of Haute Dogs in Belmont Shore intends to set the world record for most dogs in costume at a single event. Thousands come to watch this event, including people with no pets. His event is but one of dozens of pet costume contests, parades and events throughout California.

If you want to help set the record, the event is slated for October 30, 2011 at 2:30 p.m. at Livingston Park (4900 Livingston) in Long Beach’s Belmont Shore neighborhood. Proceeds from registration benefit special animal causes. hautedogs.org