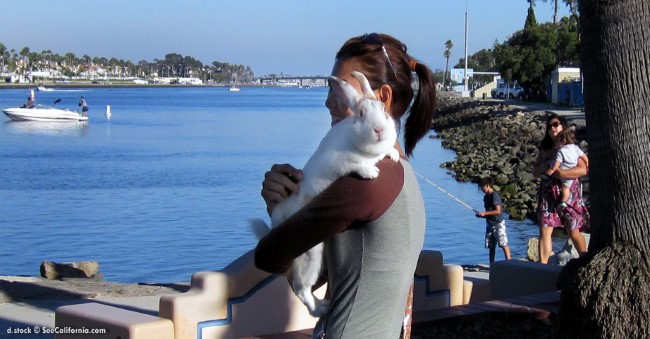 Most people take their kids to the farmers market, and some bring their dogs, but when someone brings a pet rabbit, that brings smiles! There aren’t many animals you’ll see that are kept as pets or sold as meat–but the bunny rabbit is one.

Rabbits make great pets for those who can accept that a bunny probably will never have the loyalty of a dog. It’s not in a bunny’s nature, though the rabbit is quite social with its own kind, reproducing abundantly. Rabbits can easily be trained to use a litter box, and they can be kept both outdoors or inside. In the house, they are famous for eating computer and electrical wires, or anything that they can sink their teeth into. That presents a particular challenge for rabbit owners as most houses and apartments have lots of appliances, computers and lamps with lots of dangling wires and cords. Rabbits can be electrocuted from chomping on these cords.

As a house pet, the rabbit is playful and curious, and may jump onto your lap, allowing you to gently stroke its fur. The rabbit is a bouncy, jumping creature so you can expect lots of activity when there’s one around. The average lifespan of a pet bunny is around 10 -12 years, though some live longer.