Santa Ana Zoo in Prentice Park
off the I-5 Freeway near the 55 Fwy.

The Santa Ana Zoo is just big enough to delight youngsters and adults without making you too tired to see it all. Located in Prentice Park in Santa Ana, the highlight to the zoo is its collection of primates. There's a reason that you'll always see around 50 monkeys (and sometimes more) in Santa Ana Zoo. When J.E. Prentice became one of Santa Ana's wealthiest men, he donated 12 acres of his citrus ranch for a park. But this kind gesture that was transacted in 1949 came with a hitch—the city must keep at least 50 monkeys at all times.

They say it's a jungle on the I-5 Freeway most days. But the REAL jungle is just a couple tree branches away. Santa Ana Zoo in Prentice Park less than a block (as the crow flies) from the busy interstate, was built from land deeded by a successful rancher who loved monkeys. He gave the city over 3 acres of land in 1949 with one rule—there must always be 50 monkeys on it! That's a tall order, especially in Santa Ana, ranking as the 4th most densely populated city in the U.S. of cities over 300,000. 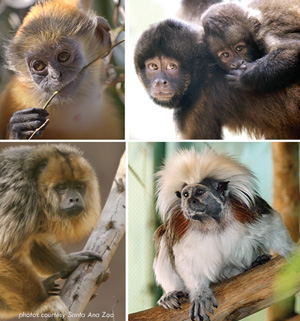 To this day Santa Ana Zoo continues to house at least 50 monkeys, but you'll also see anteaters, camels, exotic birds, poison dart frogs, boa constrictors, and hundreds of birds, reptiles and mammals. A popular petting zoo with sheep, goats, cows, pigs offers pint-sized fun, as does a train ride that goes around the Crean Family Farm. Be sure to also check out the custom designed carousel containing special zoo animal figures such as an anteater you can ride. Nearly 50% of the zoo's operating budget comes from its affordable admission, rides, and special events. As for the 50 monkey rule—there are dozens of types of monkeys to see, including endangered species. If someone tells you it's a jungle out there on Santa Ana Freeway (I-5), think about the similarities we share with our ancestors. Here are some monkey behaviors:

Tierra de las Pampas,  also known as Land of the Grasses represents Argentine Pampas. As one of the largest exhibits in the Zoo, it showcases guanacos and rheas in their natural environment, plus the giant anteater.

Entertainment and rides include a zoo train and the delightful Endangered Species Carrousel featuring traditional horses, The Giant Anteater, and a swan chariot, designed to be ADA compliant for guests with disabilities. There is also a spinning nest chariot where the children can control how fast they spin. Riders receive an educational animal card with facts about an endangered animal as they exit the Carrousel.

J.E. Prentice  always had a fascination with monkeys. His small collection at his ranch, and deed of land to the city of Santa Ana for a park with monkeys has grown into a fantastic attraction that receives several hundred thousand visitors annually.

There's a petting zoo, shows, a train ride, gift store, restaurant, meeting and event space, special events throughout the year, and some incredible animal and bird exhibits to look at. What a cool zoo!  santaanazoo.org