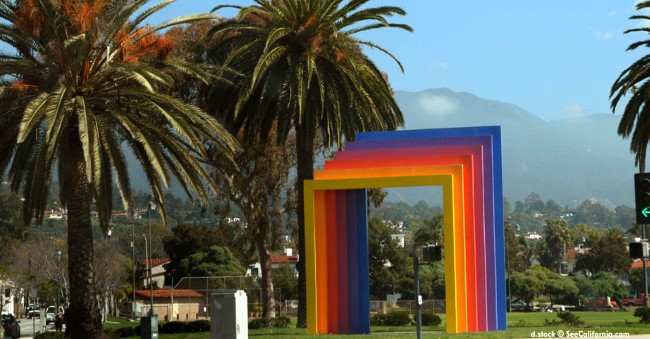 
SANTA BARBARA, CALIF.-- Did you ever want to walk through a rainbow? The next best thing exists in Santa Barbara. Located along the waterfront in a public park, the spacious green mountains are the backdrop for Chromatic Gate, a structure built as a gateway of primary colors in a rainbow pallet of yellow, orange, red, purple and blue (roughly speaking).

Designed by renown artist, Herbert Bayer, "Chromatic Gate" on Cabrillo Blvd. is near luxury hotels, and popular tourist beaches of East Beach. The trolley passes by it so you may see the structure during a ride. Herbert Bayer died in 1985, but before he passed, he spent 10 years living and creating in Santa Barbara. Traveling, creating and recognized around the globe for his creativity and unique perspective, his inspiration was said to come from artists such as Kandinsky. Bayer lived from 1900 to 1985. He lived in Montecito, south of Santa Barbara, before he passed away.

Bayer's Chromatic Gate in Arco Circle (Arco funded the construction) has Santa Barbara art visionary Paul Mills to thank (among many) for its completion and existence. Mills, the longest-serving art director at Santa Barbara Museum of Art, is known for his artistic sense and worth a study, as well.

Standing on the beach, you can look across Cabrillo Street to see Chromatic Gate, Doubletree Resort, and nearby Santa Barbara Zoo is just around the bend. Stop and take a picture when you visit. If you love rainbows, it will remind you of one. Note: The colors fade and depending on your date of arrival, the colors of the structure may be in softer tones. Chromatic Gate is known to get facelifts or makeup from time to time.

An Austrian-born artist, Herbert Bayer was a master of form. At a young age he studied at the prestigious Bauhaus under art master Wassily Kandinsky. Master photographer, inventor, artist and architect, Bayer excelled in many media. The versatile artist was initially recognized for his development of an all-lowercase and sans serif typeface for all Bauhaus publications when he worked as a graphic artist. He also designed the custom geometric sans-serif, universal.

As an insatiable learner, Bayer was mentored by artist George Schmidthammer in Linz, then continued his learning experience in the Viennese Darmstadt Artists Colony. He also studied under Wassily Kandinsky and László Moholy-Nagy at the Bauhaus where he was appointed director of printing and advertising.

Bayer left the Bauhaus at the ripe young age of 28 to take on the assignment of art director of Vogue magazine's Berlin office. Bayer worked there 10 years, presumably learning everything the job had to offer. He went to New York at age 38, and began embracing American culture. At the time he arrived, the world was in turmoil--one war and depression had occurred and another major world war (WWII) was on the horizon. It was a strategic time for the artist to pack his bags and embark on a new adventure.

Taking on many assignments, the multi-talented designer/artist was eventually hired by industrialist and visionary Walter Paepcke, based in Aspen, Colorado. Bayer helped restore Wheeler Opera House and co-designed Aspen Institute. Denver Art Museum named a gallery for him during an era in which Bayer took on commissioned public art projects. He lived in Aspen until the mid-1970s.

In 1975 Bayer moved to Montecito where his last 10 years were spent in a beautiful setting with great climate near the Pacific Ocean of Central California. He continued design consulting with Atlantic Richfield, worked on paintings and environmental projects, and locally is remembered with Chromatic Gate, installed in 1991 in Santa Barbara near his Montecito home, six years after his death.