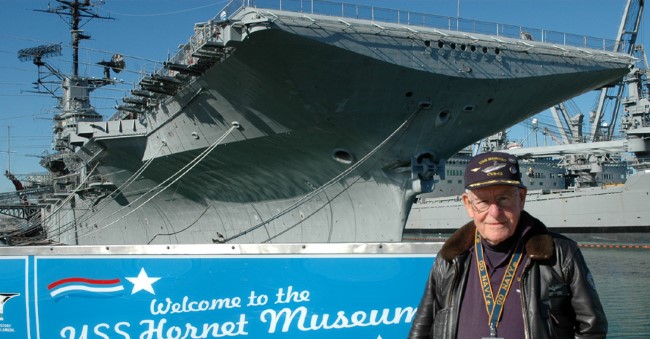 USS Hornet Museum, home to the USS Hornet floating military ship museum. WWII history comes to life on this vessel which is a museum, and includes many special events throughout the year. Location: 2324 Alameda Avenue near Park Street. Call: (510) 521-1233. alamedamuseum.org

Jim Long Links Aviation Past to the Present and Future

SUNNYVALE, CA–Over 60 years ago, Jim Long flew a plane in the Navy at Pensacola, Florida. Today, the Master Pilot Award Winner from Sunnyvale is still flying and teaching the next generation of pilots. He has flown more than 40 different kinds of planes, from F9F Panthers–the first major Navy carrier jet fighters– to Cessna, Piper and Beech aircraft. And the thrill of flight has never left him. Long still has the passion and the right stuff to be honored for his flying safety and dedication in training the next generation.

The decorated aviator also has spent more than 2,000 hours as a docent explaining military flying to visitors at the USS Hornet Aircraft Carrier, based at the former Alameda Naval Air Station in Northern California (uss-hornet.org). The Hornet is a highly decorated World War II and Vietnam combat veteran that also helped in the recovery of the Apollo 11 and 12 astronauts.

"As a docent, my job is to make the museum come alive so guests will tell others about it," Long said. Hornet guests love to hear the Navy vet talk about landing on such a carrier. Long has more than 170 such landings, flying jet fighters on such famous carriers as the USS Midway (now a museum in San Diego, CA) and the USS Franklin D. Roosevelt.

"Landing on a carrier is not much different than on land except the stopping is very much quicker," said the enthusiastic flyer. "A carrier has the wind always down the runway, while learning to land a plane on a ground runway with the wind from the side is not an easy task. The carrier always turns into the wind for landings and takeoffs--a great advantage because you can move the airport to where it's needed."

The pilot, whose aviation heroes were Glenn Curtiss and Charles Lindbergh, said he always wanted to fly and loved model airplanes as a youth. "The greatest thing about flying is that each flight is a new adventure--you take off, fly a mission and try to successfully complete the flight. The satisfaction is realized after each flight, unlike in industry, where it might be months or years before a task is completed."

"Aviation also has the feeling of finality--you must do things correctly or the end will not be pleasant," said the former Flight Test Engineer with Martin Marietta and Lockheed.

When he's not up in the air, Long's teaching others the joy of flying or the affable aviator is on the Hornet giving visitors a tour, serving on the carrier's Docent Council or Training Committee, assisting as Boy Scout Badge Counselor and even being the ship's Command Duty Officer (once a month).

Few people have given so much of their lives to aviation--from Navy fighter pilot to Flight Test Engineer to FAA Certified Flight Instructor. Long's an invaluable link from the past to the present to the future. One of his former students is even an Airline Captain. His zest for life and sharing his love brings his passion to new heights for