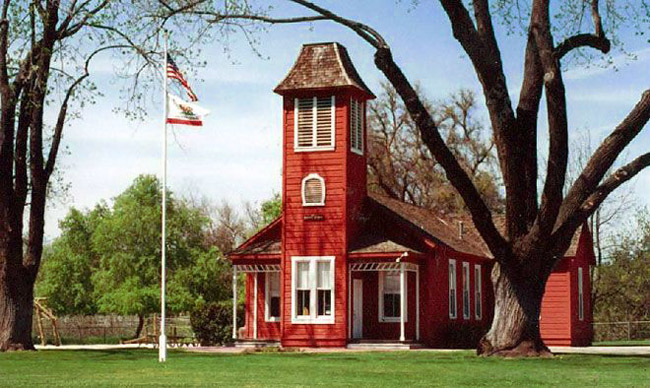 The first school, Ballard's Little Red School House, was built in 1882 and is still in operation today, being the primary tourist attraction in what turned out to be a tiny village, bypassed as a city. Today the historic school sits on a vast expanse of green lawn in a quiet neighborhood.

Because the schoolhouse was the only public building in the valley in the early days, it was often used for church services, weddings, funerals and the meeting place of the Good Templar Lodge and the Farmer's Alliance. It also served as a site for lectures, social entertainment, lively debates, singing and Saturday night dances.

Visitors are limited to stopping for picture taking or simply driving by to view this example of Americana, preserved in its original condition. Still, a memorable scene if you’re in the area.

Ballard was founded in 1880 at the location of a Wells Fargo stage line station, named by George Lewis after William Ballard, the former proprietor, who ran the station from 1862 to 1870. In 1882 it was believed that Ballard would grow into the central metropolis of Santa Barbara County.

Today, Ballard is a combination of sleepy village and upscale bedroom community. The surrounding area is noted for its thriving and well-respected wine industry. The wine-producing region around Ballard was featured in the Academy Award-nominated film Sideways. The only commercial establishment currently operating in the main village is The Ballard Inn, a four-star restaurant and luxury bed and breakfast inn in the heart of the village.