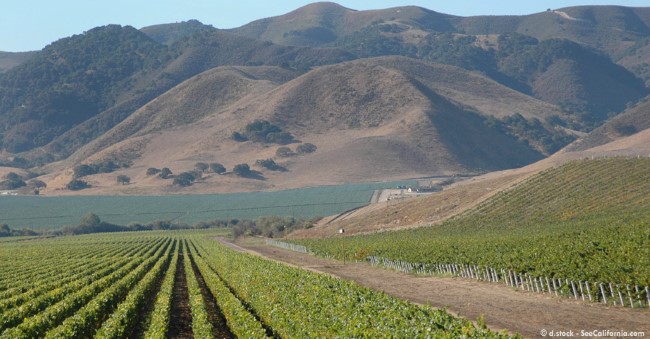 Los Alamos, California is a small city along Interstate 101 between Solvang and Santa Maria. The city has some residences, mobile home parks, and a few historic buildings, shops, a market, restaurants and gas station.

The big shindig happens once a year when the city hosts "Old Days" in September. Vendors with a variety of foods, bands, dancers, and displays of old farm equipment, automobiles and other items bring out the town and those of use who love history and old fashioned things. This land that is flanked by mountains and sits in valley filled with neat rows of wine grapes, has a great history the brings meaning to the town's "Old Days".

Los Alamos is Spanish for "the cottonwoods" and describes graceful trees lining the banks of the San Antonio Creek. Located in a valley bounded on the south by oak studded Purisima Hills and on the north by Solomon Hill, Los Alamos is an interesting side tour off Highway 101. Halfway between San Luis Obispo and Santa Barbara, the historic town which was once a stage stop has two historic hotels, several restaurants, antique shops, a winery and an annual street celebration in September. When Mexico broke free of Spanish rule in 1821, Los Alamos valley was granted to Antonio De La Guerra y Noriega who controlled 49,000 acres known as "Rancho Los Alamos". The hills above his town served as a hideout for highway bandito, Solomon Pico, whose escapades were popularized by the character "Zorro". As cousin to Mexican governor Pio Pico, he enjoyed immunity from the law. Skulls with bullet holes found in isolated canyons and stories about Pico fueled legends. This lawless character who frequented the region during the 1840s was said to terrorize gringos, even wearing a necklace made of his victims' ears. The Victorian Mansion (above) was built in 1864. It currently operates as a resort hotel offering theme rooms which include hidden bathrooms, spiral staircases, hot tubs, swaying sea lanterns, a chariot and a 1956 Cadillac. Remote control units operate some of each room's special effects. Egyptian Room: Persian rugs, images of sand dunes and palm trees and a life-size King Tut hides the entry to your bathroom. The 50's, Roman, French, Gypsy and Pirate are your choices. Selected as a #1 favorite by magazines in the US and France, guests find this fantasy retreat a diversion from their busy lifestyles. 362 Bell Street, Los Alamos, California 93440 Rooms are also available next door at the Alamos Hotel.

Leslie House , 349 Bell Street, Los Alamos
Antiques, Collectibles, Vintage Curiosities, Falderal and Nonsense. The shop is owned by Jan Klaft, who also is your point of contact for information on Historic Days in September. (805) 344-2504.Los Alamos was founded in 1876 when John S. Bell and Dr. J.B. Shaw purchased property released from Spanish land grant after California became a state. Its location and distance from the Los Olivos stage stop created a need for lodging so Union Hotel was built and the town also became a stage stop.The Wells Fargo stagecoach began making daily trips from the Union Hotel in Los Alamos to Los Olivos and then to Santa Barbara. Hold-ups and robberies were common so passengers traveled at their own risk. Historical data includes reports of highwaymen along this route demanding valuables, watches, and the Wells Fargo strong box on several occasions.Stagecoach, horse and buggy, wagons, and horseback were the only means of transportation to and from Los Alamos until the opening of the Pacific Coast Railway in the early 1880's.
Oil was discovered at the turn of the 20th century and a few years later in 1902, an earthquake destroyed all but a few buildings in town. Los Alamos now has about 1,000 residents and a variety of shops, including a winery.
Winery
Bedford Thompson, 9303 Alisos Canyon, Los Alamos 805-344-2107
Daily 10 a.m. to 5 p.m. Free Tasting, Picnic Area and Chardonnay, Cabernet Franc, Pinot Gris, Syrah and Viognier winesWhere to stay? Lompoc, Solvang, Buellton and Santa Maria all make great options for your visit to Los Alamos.