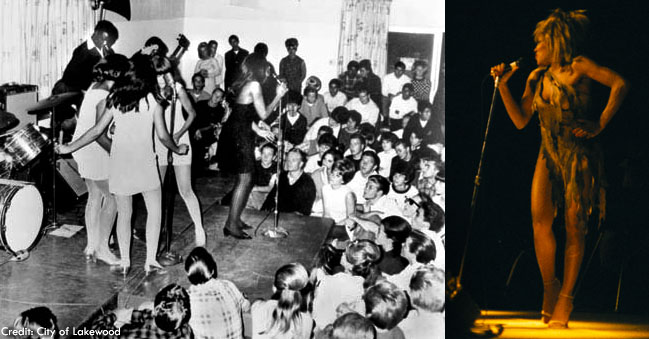 Lakewood turns 60 this year. Many don't know that Tina Turner, who's performed with nearly every famous musician you can think of, made a musical appearance at the Lakewood Youth Center in the 197os. Yes, that's her in pictures above! It's highly unlikely that eight-time Grammy winner who has sold more concert tickets than any other solo performer in history will show up at the Southern California celebration, much less remember her performance there some 40 years past.

The lady with legs described by former President George W. Bush as "the most famous in show business" still can show them off at the age of 74, although the public doesn't get to see them quite as much these days. In October 2013 Tina Turner relinquished her U.S. citizenship and became a Swiss citizen--she lives near Zurich.

The photos don't lie and like remembrances of a Tina Turner performance, Lakewood remembers the day May Company opened in 1951 with more than 300,000 square feet of shoppers' delight; 20,000 visitors each weekend walked through the model homes at Lakewood Park tract; and the first city council was sworn in on April 16, 1954. The "Lakewood Plan" established a government which contracts services (now 43% of city budget) rather than pay full time positions. Widely copied by other cities looking for ways to trim costs, skeptics predicted failure for the plan--boy were they wrong! Congratulations to Lakewood's nearly 81,000 residents who live 23 miles southeast of Los Angeles and 7 miles inland from the Pacific Ocean!