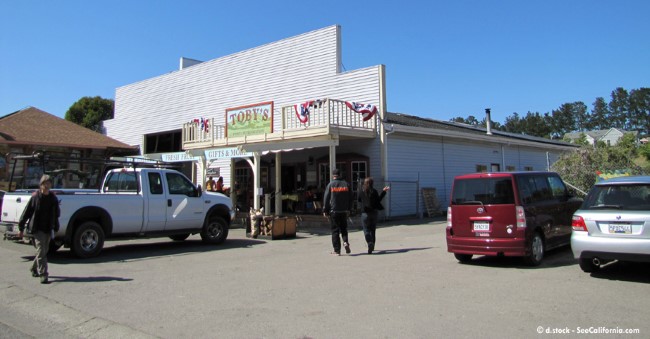 The Steele family, including Clara and her husband Rensselaer and his cousins Isaac, Edgar and George, arrived from Ohio and started farming north of San Francisco. In 1857, Clara hired a local Indian man to rope some of the wild cattle that grazed near her home. She milked these cows and, using a recipe from a cookbook that belonged to her English grandmother, began making Cheddar cheese. The cheese was an immediate success in the San Francisco market, which prompted the Steeles to launch a commercial dairy operation, that made high quality butter and cheese. Their dairy was one of the first, and quite possibly the first commercial dairy in the entire United States. Looking to expand, the Steeles explored Point Reyes as a possibility.

When their business partner, Colonel Lewis, surveyed the land with Isaac Steele, he declared it "cow heaven!" The family's new 6,000-acre dairy farm soon prospered on Point Reyes, with its rolling, green grasslands and temperate climate thanks to the recurrent fog.

The Steele's success sparked the growth of the Point Reyes region, eventually placing it alongside New York state as the two centers of commercial dairy production in the country. Their 1861 production of 45 tons of cheese made them the largest producers of cheese in California. In fact, during the 1861 season, they made 640 pounds of cheese and 75 pounds of butter per day. They shipped their cheese to San Francisco by steamer since rough roads made the trip impossible. In return, the schooners brought back the comforts of the city to Point Reyes. Cash accounts from 1861 accounted for smoked salmon, brandy, clothing, sarsaparilla, coffin trimmings and a Steinway piano.

Although the Steeles were the first to operate a commercial dairy in the rugged new state, they were not the only prospering dairy on Point Reyes. Brothers George and Charles Laird, who leased 3,000 acres on Tomales Point, the northernmost tip of Point Reyes, operated a dairy that rivaled the Steeles' in size, output and quality. In 1859, the Laird's cheese captured first place from the Steeles at the state fair and, in 1860, George Laird gained fame for producing a 1,600 pound cheese.

While the Laird and Steele families are credited with pioneering the Point Reyes dairy industry, brothers Oscar and James Shafter, prominent and energetic businessmen with keen foresight, developed Point Reyes to be the leading dairy region not only in California but in the entire West. Both brothers were prominent attorneys from Vermont before they moved to San Francisco. In 1857, during a twisted legal battle in which five men claimed ownership of Point Reyes, the Shafter legal team won the territory for their client, Dr. Robert McMillan. In return, McMillan sold the highly regarded property to the firm. In total, the Shafter brothers bought almost the entire peninsula for less than $85,000.

Oscar and James Shafter, along with Oscar's son-in-law, Charles Howard, promptly established their home ranch on the property (home of the present day Murphy Ranch) and wrote leases to the Steele, Laird, and other dairies already established on the territory. Howard became the most active member at the ranches, providing hands-on management of ranch construction and dairy operation.

The family resolved to keep the property together and pursue a tenant system. Each ranch was named a letter of the alphabet, starting at the tip of Point Reyes (A Ranch). Under Howard's stewardship, the dairies doubled in number. By 1870, Shafter-Howard owned 20 dairies with plans to add seven more from the ones previously leased. Typically, tenants leased the ranches from one to three years. The tenant rented the cows ($20-$25 per cow, annually), buildings and land, but provided their own home furnishings, dairy and farm implements, horses and pigs.

By 1866, the Point Reyes dairies led the field in production. Although the family experimented with producing cheese, they felt the land was better adapted to making butter. Consequently, they pursued their goal to produce the finest quality butter in great quantities for San Francisco.

Certainly, the market existed. Demand in the rapidly growing city was so great that the inferior butter from South America and the East Coast was still being imported. But this product was no comparison to the Point Reyes standards. As one contemporary journalist reported, "the grass growing in the fields on Monday is the butter on the city tables on Sunday."

The Shafter and Howard ranches became famous as examples of well-organized, clean and successful dairies producing the highest quality products. In 1875, the Marin County Journal reported that the excellent quality of Point Reyes butter resulted from the advantages of the peninsula's climate, "coupled with the evident enterprise and liberality of the owners of the land in improvements, and the wide-awake spirit of the tenants in efforts to out-vie each other in the quality of their products have given to the Point Reyes butter a most enviable reputation in the markets." No doubt, competition among the prospering farms existed. Many of the tenants immigrated from Sweden, Ireland, Germany, Switzerland and Portugal, each bringing their desire for success to the new territory.

At the height of the Shafter and Howard Empire, 31 dairy ranches were in operation. For each location, a reasonably flat site was chosen that was central to the grazing area and had a nearby spring to supply water for both the ranch house and the cows in the corral. Because it rarely rained, milking was done outdoors in a well-drained, central corral. Each milker took charge of a string of cows (between 20-25) and could milk them in two hours.

The buttermaker reigned over the dairy and had tremendous responsibilities to the tenant and owners. He usually worked his way up in the dairy, starting as a milker and learning the skills on the job. To make butter, the cream had to be separated then churned through laborious processes that required skill to prevent spoilage. Then, the freshly churned butter was salted to prolong storage, divided into two-pound blocks and stored in a cool cellar until it was shipped by schooner to San Francisco. By 1880, the demand for the Point Reyes butter was so great that dairies around the area were counterfeiting it. Empty Point Reyes butter boxes left by the commission merchants would be repacked with "common" butter and sold at a higher price. Upon learning this, Shafter and Howard trademarked their butter and stamped the letters P.R. on each package made at their ranches. This step to protect the quality and authenticity of their products may be one of the first forms of branding of a consumer product in California.

The Shafter and Howard families owned most of Point Reyes for 82 years, from 1857-1939. During that time, the operation of the ranches changed little, except for modernization in technology and transportation. The eventual sale of the ranches, between 1919 to 1939, was done in three transactions, ten years apart from each other. Most of the ranches were sold to tenants, resulting in increased prosperity and pride. Moreover, dairy production increased through herd improvements and physical modernization unhindered by a distant landlord. Indeed, a new way of life swept through the dairies at Point Reyes.