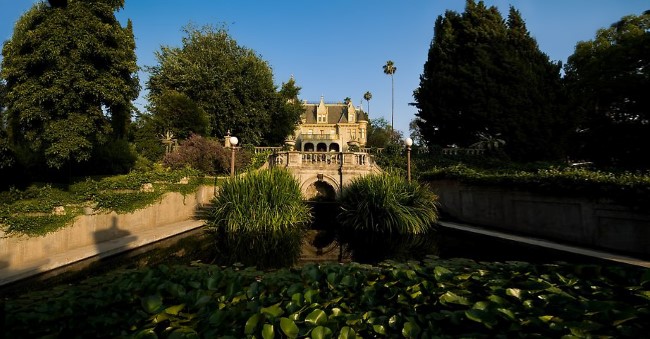 Known for its seemingly endless miles of orange groves in a lush valley right next to the San Bernardino mountains, Redlands was the largest navel orange producing region in the world for over 75 years from the late 1800's to the late 1950's, attracting people to this paradise. Even today, the smell of the orange blossoms provides a unique fragrance seasonally. Redlands was once the known as The City of Millionaires, and was favored for its inland climate that is a bit dryer and sunnier than the beaches and coast about an 90 minutes away by car. It truly was considered the premier place to live.

The navel orange became a symbol of Southern California and Redlands was the prominent symbol of orange growing. By 1904, over one million boxes of oranges were distributed from over 30 packing houses. Today only one packing house remains.

The City of Redlands actually was involved in the citrus business in 1968 when it acquired the Prospect Park Grove through money donated by its citizens and federal grants. Additional groves were acquired in the 1970's with park acquisition and development taxes. In 1979, a City ordinance called for the "historical preservation of citrus" to be supported by crop receipts and park tax funds. Today, Redlands owns 16 citrus groves totaling 209 acres. They include Valencia Oranges, Naval Oranges, Ruby Star Grapefruit, and Rio Grapefruit. The City of Redlands Citrus Preservation Commission oversees the city's operations as an enterprise to maintain these groves. Revenue received from the harvesting of the crops is used to continue the on-going cultural care.

Founded in 1881 and incorporated in 1888, Redlands, once the Washington Navel Orange Growing Capital of the World, features beautiful tree-lined State Street comprised of beautiful historic buildings and locally-owned shops and boutiques. The City of Beautiful Homes, it was once called, still boasts some eye-catching historic properties that wow visitors. America's Favorite Victorian (Morey House) on Terracina Boulevard; the Butler Belt which once had the densest population of homes employing butlers in the city; stately homes of Olive Avenue, and Highland Avenue; and a PBS "America's Castles" favorite, Kimberly Crest House and Gardens, amaze travelers who are glad to discover the gem that Redlands was, and once again has become, thanks to a Renaissance.

When taking a drive tour, be sure to pass by A.K. Smiley Public Library featuring Moorish architecture and dating to 1898. Redlands Bowl, built in 1930, is home to the oldest continuously free outdoor concert series in California. Be sure to stroll through the Smiley Park neighborhood, filled with turn-of-the-century bungalows and landmark homes.

Things to see in Redlands:

Historical Glass Museum - Over 6,000 unique dishes, plates, cups, and decorative glass items from the early 1800's to today are featured in a restored 1903 Victorian house that serves as the museum. A celebrity glass collection includes pieces from the estate of Liberace, actor & director Harold Lloyd, and more. Admission is free.

Kimberly Crest House & Gardens - A must-see during visits to Redlands is the Kimberly Crest House, with grounds available for spectacular weddings. Modeled after a French chateau, it has been lived in by only three families since being built in 1897 by Mrs. Cornelia Hill. The Magic Castle in Hollywood is an exact mirror image of Kimberly Crest. The house was restored to its original beauty and is operated by the city.
Location: 1325 Prospect Drive
Hours of Operation: Thursday - Sunday, 1:00 to 4:00 p.m. kimberlycrest.org

A.K. Smiley Public Library - Constructed in 1898, the library is the culmination of the philanthropy of hotelier Albert K. Smiley. Among California's oldest and most important public libraries, it is of historical interest designated by the California Historical Landmarks Advisory Committee, and is listed on the National Register of Historic Places.
Location: 125 West Vine Street, Redlands, CA. Open daily except holidays, call first to confirm.

Asistencia Mission de San Gabriel - operated by the San Bernardino County Museum, it was built between 1830 and 1834 by the Franciscan Fathers of Mission San Gabriel, and has been restored to the original design. Charming in every way, it includes a wedding chapel, cactus garden, bell tower, wishing well, and a museum with exhibits that depict Native American and early pioneer life. Usually open Wednesday through Sunday.
Location: 26930 Barton Road, Redlands, CA