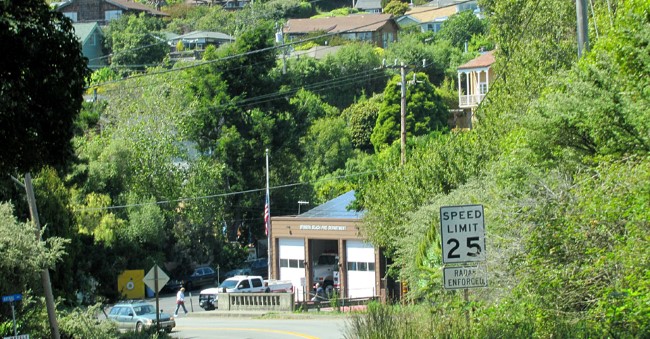 North of San Francisco along the natural coast lies a town with appeal for those seeking a less hectic pace. Stinson Beach is located along the Bolinas Bay with Mt. Tamalpais State Park and Muir Woods National Monument (and beach) to the south and Bolinas (and lagoon) to the north.

The small town of less than 500 population features homes set into the mountains. Most are surrounded by greenery and shrubs so they blend into the landscape rather than obscure the setting.

The town has a few stores such as the Stinson Beach Market where you can buy nearly everything you need in a full service grocery store. Groceries, wine, liquor, deli, produce, meats and coffee are a few popular items to grab & go on the run for your hikes, drives and exploring this scenic coast. Outside the market and the signature brown benches that you'll often find in this neck of the Bay Area woods. Slow & easy, people can sit and read a paper, study a map, or just enjoy the daytime sun while waiting for travel companions who are running errands.

Coast Miwoks native Americans lived in and around Stinson before the Gold Rush and arrival of immigrants from around the world. Named for Nathan Stinson (and his wife Rose,) the modern day beach with access roads from San Francisco began to blossom around 1890 when the couple created Willow Camp for tourists on vacation. By 1900 visitors could ride a ferry and train from San Francisco, then catch a stagecoach down to Willow Camp, all within one day. Cars made Stinson Beach more accessible, though the area retains its rural charm, thanks to rigid laws that regulate building and construction. The beach was turned over to the State of California in 1950 to help preserve the quiet charm of Stinson Beach which was jeopardized by eager builders. The establishment of the Golden Gate National Recreation Area in 1972 placed Stinson Beach under the jurisdiction of the National Park Service. While there are some houses and commercial enterprises, the homes rarely go up for sale and prices can be quite high.

The popular Dipsea Race that spans a challenging 7 miles route from Mill Valley to Stinson Beach, passing through forests and meadows, hills and valleys (second oldest footrace in the United States) started in 1905, and is held usually in early June.

Stinson Beach is along Highway 1, known as Shoreline Highway in the area. The town is also within the bounds of the massive Golden Gate National Recreation Area north of the city of San Francisco.

There is no single entrance into the Golden Gate National Park which has grown into the largest national park in an urban area in this U.S. Fort Point and Muir Wood National Monument are operated under the auspices of the entity. Spanning three counties--Marin, San Francisco, and San Mateo, there are an estimated 20 million visitors annually to this one park system which includes Alcatraz Island, Crissy Field, the Presidio, Marin Headlands, Stinson Beach, Fort Mason, Ocean Beach, Fort Funston, Sweeney Ridge, and Mori Point.

Part of the United Nations-designated Golden Gate International Biosphere Reserve, the park includes both recreational activities residences, and science facilities for studies of plants and animals.

Stinson Beach includes restrooms, cold showers, picnic areas, and BBQ grills. A snack bar is open during summer months at the base of the main lifeguard tower. Restrooms are located along the beach adjacent to each of the parking areas.