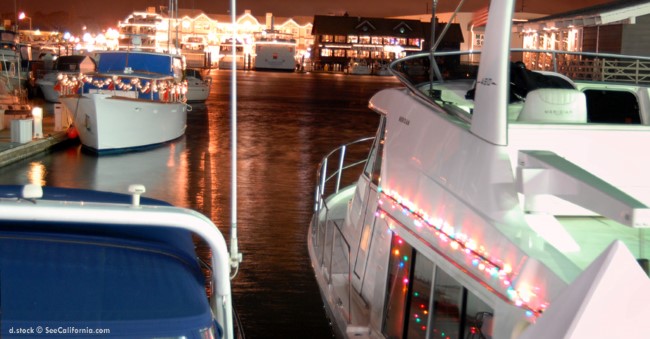 Each year on the first Saturday in December, the Lighted Yacht Parade kicks off the holiday season. Bay Area boat owners share in the holiday spirit by decorating their boats and participating in the parade. Hundreds of spectators gather along the waterfront at specified viewing areas or at restaurants that afford them a view of the estuary.

The parade may take a longer route passing by Fortman and Grand Marina to include the Alameda and Island Yacht Clubs. Staging between Wind River and the Fortman Marina's public pier as the sun goes down. At dark boats proceed to the judging area along the Alameda side past Encinal and Oakland Yacht Clubs. Proceeding down the Alameda side to the Rusty Pelican the boats cross to the Oakland side and pass by the Port of Oakland, Scott's and Kincaids continuing down the Grand Marina, turning and making its way past Grand and Fortman Marina back to the staging area at Wind River.

In 2009 thirty-five boats participated in the parade, and each year since the organizers have seen tremendous growth. Hosted by Encinal Yacht Club, Oakland Yacht Club and Marina Village Yacht Harbor in the Oakland, Alameda Estuary.

In addition to being a magical evening of lights, it also raises money, toy and food donations for The Oakland Firefighter 's Random Acts and the Alameda County Community Food Bank. Sponsorship helps ensure that an even greater contribution can be made to both of these fine charity organizations.

The Oakland Yacht Club and Encinal Yacht Club have organized a beautiful lighted yacht parade that will sail throughout the Oakland/Alameda estuary. Jack London Square provides excellent viewing areas and restaurants to watch this magnificent holiday attraction. Please make sure to book your dinner reservations early at your favorite Jack London Square restaurant. Special performance by the Oakland Symphony Chorus will begin at 5:30PM. jacklondonsquare.com

For other fun events throughout the year, be sure to check out Halloween events, the Spring Egg Hunts, Oktoberfest and the Nutcracker Ballet.