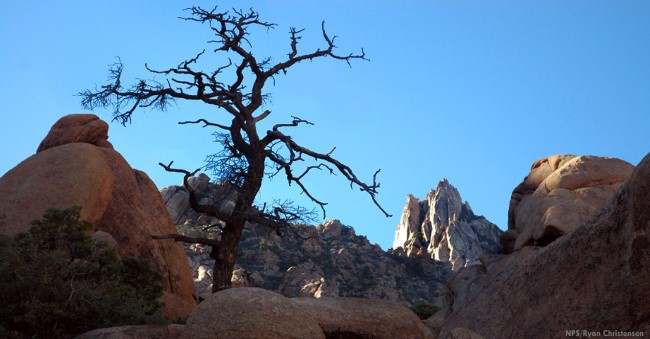 New York mountain (elevation of 7,533 feet) is a range just south of the small town of Ivanpah, and north of the Lanfair Valley. The mountain range goes mostly southwest-northeasterly direction between the Providence Mountains and the McCullough Range approximately five miles into Nevada and border the northwest corner of the Piute Valley of Nevada-California.


The New York Mountains are part of the southeast border of the Great Basin Divide; the Sacramento Wash (California), the western part of the Piute Wash Watershed empties eastward into the south-flowing stretch of the Colorado River.

The New York Mountains are a southwest by northeast trending range, about 30 miles long.

The Granite Mountains is a small mountain range in San Bernardino County, California, USA, located in the Mojave Desert. They are in the Mojave National Preserve, in the National Park Service system.
Contents

Some of the more striking rock formations in the Mojave National Preserve lie in the Granite Mountains. These granitic rocks have eroded into unusual rounded shapes that include spires, perched boulders, and curved cliff faces.

Granitic rocks represent the roots of ancient continental-margin volcanic systems. Most of the granitic rock in the Mojave Desert is late Mesozoic in age (80 to 180 million years old). The granites formed at depth within a volcanically active mountain range comparable in geologic setting to the Andes chain in South America.

The granitoids formed by the slow cooling and solidification of molten magma bodies that developed above sinking slabs of oceanic crust overridden by the edge of the continent. At least 55 or 60 million years elapsed between the crystallization of the last Mesozoic magma bodies and deposition of the youngest-preserved overlying strata.

Several springs exist in the Granite Mountains, though they may not flow year round.

The Sweeney Granite Mountains Desert Research Center is located in the rugged Granite Mountains of the East Mojave Desert. High plateaus and ridges dominated by pińon-juniper woodland and sagebrush descend precipitously to the east in highly fractured granitic canyons. Massive pinnacles and broken, rocky terrain eventually give way to densely vegetated bajadas and washes, supporting creosote bush scrub, a unique community of enriched mixed woody and succulent scrub, and other habitat types. Springs and seeps are common. Variation in habitat, hydrology, and elevation supports widely diverse plant and animal life, including more than 460 species of vascular plants, two amphibians, thirty-four reptiles, 138 birds, and 42 mammals. The reserve also protects a dense concentration of archeological sites left by Chemehuevi and other Native American tribes. This NRS reserve lies within the recently established Mojave National Preserve. Operating as a satellite site is the Sacramento Mountains Reserve, which lies on the steep slopes and flat bajadas of the Sacramento Mountains in the East Mojave Desert. This satellite site supports several Sonoran Desert plant species, including Bigelow teddy bear cholla, along with a small, disjunct colony of ocotillo, one of this species's northernmost occurrences


What areas are accessible that don't require driving on dirt roads?
Kelso Depot Visitor Center, newly restored to its appearance in 1924 is 18 miles north of I-40 and 34 miles south of Baker along Kelbaker Road. It is open 7 days a week from 9-5 and includes exhibits on desert ecology and history.

Kelso Dunes, 8 miles south of Kelso Depot on Kelbaker Road, tower over 600 feet high. The dunes are accessible via a gravel road that does not require four-wheel drive.

Teutonia Peak Trail with elevations upwards of 5,000 feet, located along the paved Cima Road. From this vantage point, visitors will observe Cima Dome which boasts the largest, densest Joshua Tree forest in the world.

Is there camping at Mojave?
Yes. There are two National Park Service Campgrounds, as well as other camping options nearby. Roadside camping and backpacking are also permitted.

Are pets allowed?
Yes. Pets outside vehicles must be on a six- foot leash at all times. Please do not leave your animals locked in your vehicle, particularly during the brutal heat of summer.

Are there gas stations or motels?
No. The nearest gas stations are available at Baker, Cima Rd. & I-15, Primm, Searchlight, Fenner, Amboy and Ludlow. Lodging is available in Baker, Nipton, Ludlow and Needles, California, as well as Primm and Searchlight, Nevada.

Is there food service?
Yes. The Beanery at Kelso is the only restaurant within the preserve. The historic 1920's lunch room offers hot & cold beverages, soups, salads, sandwiches, snacks, and desserts. Located at the Kelso Depot Visitor Center. Open Friday through Tuesday, 9 a.m. - 5 p.m. Closed Wednesday and Thursday.

What types of wildlife inhabit Mojave?
Desert tortoises, bighorn sheep, mountain lions, bobcats, roadrunners, golden eagles, gila monsters, and jack rabbits are just a few of the animals that live in the Mojave Desert. Most wildlife in the park is nocturnal and therefore, not as readily observable during the day.

Are there poisonous snakes?
Several kinds of rattlesnakes, including the highly toxic Mojave green live in Mojave. To avoid an encounter, watch where you put your hands and feet, especially when climbing on rocks. Staying on trails makes it easier to see snakes in your path.


Three of the four major North American deserts are found at Mojave National Preserve: the Mojave, Great Basin and Sonoran. Dozens of seeps and springs coupled with varied elevations and soil types create microhabitats that support a diversity of plant and animal life. Cactus gardens, relict plant communities of white fir and chaparral and the densest, largest Joshua tree forest are all found here.

Geologically, the region is just as diverse as it is ecologically. Mountain ranges, dry river beds, great mesas, towering sand dunes, striking cinders cones, domes and lava flows define Mojave. Ancient rocks that date back to 2.5 billion years old have been discovered in the Clark Mountains.

Temperatures vary considerably along with the great range in elevation, from 7,929 feet at Clark Mountain to 880 feet near Baker. Summer temperatures average from 90 to upwards of 105 degrees, while lows in the winter can plummet to the 20's and blanket the Mojave with snow. As elevations effect temperatures, so too does it influence precipitation. Mountain areas receive around 9 inches annually, while lower lying areas near Baker average only 3.37 inches. At least 25 percent of precipitation falls in localized summer monsoon thunderstorms.

This dragonfly enjoys the lawn at Kelso Depot.

Much of Mojave National Preserve appears to be barren, nearly lifeless. Signs of animal life are subtle and easily overlooked. Closer investigation reveals that the desert is home to many animals. Birds and lizards are seen most frequently, but time of day, weather, and season all play a role in determining which animals are active. Desert animals must survive in brutal heat with light vegetative cover. They are supremely adapted to manage the temperature and moisture stresses. A large percentage of desert animals are nocturnal, or active at night, allowing them to evade higher temperatures and predators. Nocturnal animals include most desert rodents, bats, owls, mountain lion, skunks, and foxes. Other animals are crepuscular, active at dawn and dusk. Diurnal animals, active during the day, are the most dynamic in that their activity periods change based on temperature and season.

The vegetative resources of Mojave National Preserve reflect the mingling of three major North
American Deserts: the Great Basin, Mojave and Sonoran and is considered a unique floristic
area. Vegetative attributes of the Preserve primarily represent the Mojave Desert but contain
floral species of the Great Basin, Sonoran and some elements of the California Coastal Zone.
831 plant species have been documented within park boundaries. Many

The New York Mountains are found in northeastern San Bernardino County in California, USA; the range's northeast lies in southeast Nevada. The range lies just south of the small community of Ivanpah, and north of the Lanfair Valley. The mountains are part of the mountain ranges, cones, mountains, and landforms in the Mojave National Preserve. The mountains reach an elevation of 7,533 feet (2,296 m),  and run in a mostly southwest-northeasterly direction between the Providence Mountains and the McCullough Range approximately five miles into Nevada and border the northwest corner of the Piute Valley of Nevada-California.

The New York Mountains are a southwest by northeast trending range, about 30 miles (48 km) long, the northeast in Nevada. The northeast of the range is at a converging point of mountains and valleys, just southwest of Searchlight, NV. The Piute Valley drains southeast, and the Castle Mountains of Nevada merge with the north of the Piute Range, the western border of the valley.

Where the ranges converge, the southwest of the endorheic Eldorado Valley drains northward. The southern end of the McCullough Range, the west border of the Eldorado Valley, also converges with the other three. The southwest Eldorado also has a Desert Bighorn Sheep habitat, not public accessible, the Highland Range Bighorn Sheep Habitat.
For flora of this area, see Flora of the California desert regions.

Northwest of the New York Mountains, the Ivanpah Valley begins draining slightly northwest then turns north into Nevada. The extensive McCullough's border east, and two playas are in the Ivanpah Valley's north, Roach Lake, and Ivanpah Dry Lake. The Interstate 15 in Nevada route passes through the dry lakes.