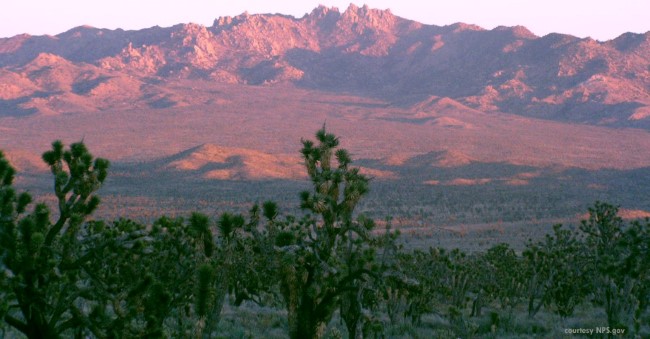 There are four deserts in North America: The Great Basin, Mojave, Chihuahuan, and Sonoran. California consists of two desert regions that are designated by high and low desert elevations. The  Sonoran desert is the low desert and Mojave desert is the high desert region. It is accessible with roads and major highways Interstate 15, Interstate 40, US Highway 395 and US Highway 95.

The Mojave Desert spans southeastern California, southern Nevada, western Arizona, and southwest Utah. Over 1 million people live in this often hot, arid land and among its major cities is Las Vegas. Receiving less than 13 inches of rain annually, and located in a region generally between 3,000 and 6,000 feet elevation, the Mojave is a beautiful desert with many places to explore. But for those heading, beware of the weather and take safety precautions. October is recognized as a prime time to visit and experience the Mojave's coolest temperatures and least likelihood for run, which easily floods the parched land.

The Mojave Desert contains a number of ghost towns, including Calico Ghost Town and the old railroad depot of Kelso.

While somewhat confusing in its being called the high desert, the Mojave contains the lowest place in North America, Death Valley, where temperatures surpasses 120 °F in late July and early August. Hikers who become disoriented because of the heat or other reasons can quickly die if not found. The body becomes overheated and dehydrated without water. When taking a desert drive, keep a supply of water in your vehicle and on you at all times, some communication devices such as cell phones, and check road conditions for the unexpected sand storms.

The Mojave desert weather often influences what goes on at the beaches of California, believe it or not. The cool, tranquil and pleasant coastal sand spots suddenly rise 30 to 40 degrees, causes by Santa Ana winds that blow off the desert. When it happens, the temperature at the beach can be the same or hotter than the desert temps. This type of condition that creates a hot beach climate usually happens once or several times a year.

Other areas commonly influenced and affected by the Mojave includes the famous Cajon Pass, Soledad Canyon and Tehachapi. Winds from the desert create dangerous driving conditions for truck and transport vehicles, sometimes requiring closure of main highways connecting California with the nation. Such closures are usually brief, however.

Boundaries of the Mojave Desert include Tehachapi, San Gabriel and San Bernardino mountain ranges. The Great Basin shrub steppe lies to the north; the warmer Sonoran Desert, known as the Low Desert, is south and east.

Within the Mojave ecosystem are many endangered animals and plants. Some are protected by the four National Park units. Stewards of our public lands are faced with the need to make sound decisions on land use that will allow for economic, recreational, and military use, while still keeping the desert ecosystem healthy and ensuring the survival of threatened species. The Mojave desert supports up to 2,000 species of plants. Other portions of this vast desert of the Southwest are controlled and managed by six major military training bases, and Bureau of Land Management (BLM).

This interesting history of the Mojave Desert shows the progression from early discovery in the 1700s by Spanish explorers, to today. It yields information about some desert animal extinction. Notice during World War II that military training and a decision to rid the desert of coyotes and other animals created an imbalance in nature that continues today.