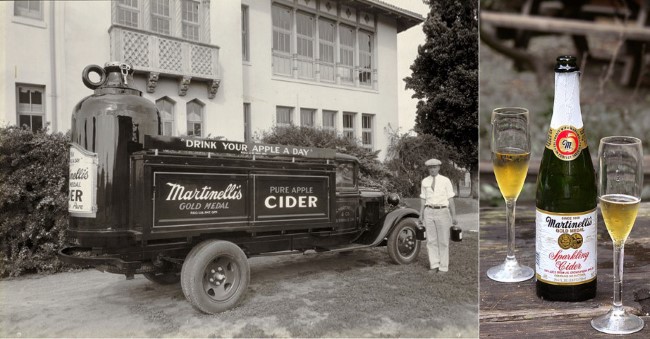 
My family doesn't dislike wine--we simply prefer Martinelli's Sparkling Cider as a dinner beverage to go with our meals. It is one of those wholesome drinks that refreshes, and doesn't have the negative effects of alcoholic beverages. We can still hop in our car and take a drive afterward, not worrying about blood alcohol levels!

Martinelli's has been based in Watsonville since 1868, and is operated today by the 4th generation of the Martinelli family. It employs around 180 people in Watsonville in Santa Cruz County, and produces a variety of apple-based beverages, including the sparkling cider, an apple cocktail that comes in a wine-shaped bottle. Though the company does not specify its sources for apples, it says the apples are organically grown by local U.S. growers suppling tree-ripened, hand-picked apples, including the old-fashioned tart-sweet Newtown Pippin.

Martinelli's Sparkling Cider used to be on sale around the holidays at great prices around $1.29 per bottle but the cheapest we can find it on a regular basis is at Costco, sold in a 4-pack which is usually under $2/bottle. You can also shop around for sales in drug stores and grocers, though you'll seldom find it any cheaper.


2011 was an interesting year for president of the company, John Martinelli. A fire at Apple Growers Ice & Cold Storage destroyed around $3 million of Martinelli's juice and cider kept at the facility which sits across the street from Martinelli's West Beach plant. Since Martinelli's  juice is made from fresh apples, not concentrate, the company can't process all the fruit it acquires during the roughly two-month harvest season beginning in late August or early September. That makes cold storage critical.
Martinelli's, however, owns a former Green Giant frozen food plant on West Beach Street in Watsonville and feels confident that the company will hardly miss a beat this holiday season.  The beverage is certified Kosher, as well.  martinellis.com