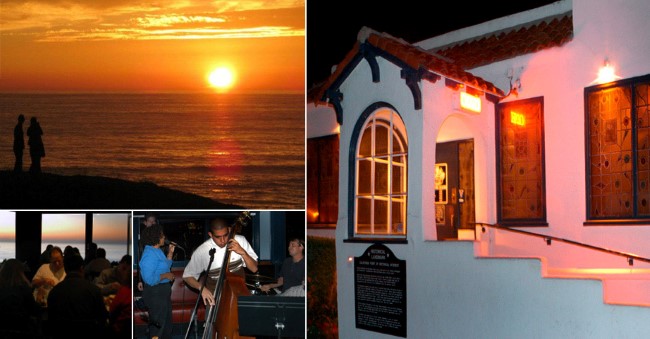 The Moss Beach Distillery is a California Historical Point of Interest that was known in the Bay Area amd San Mateo County coast for its rum running, bootlegging and speakeasies. Speakeasies sold liquor illegally during the prohibition.

Frank Torres built the club, Frank's, in 1927, and it became the hideaway for celebrities, silent film stars and politicians seeking to drink in a club atmosphere. Mystery writer Dashiell Hammett frequented the place and used it as setting for one of his stories.

The restaurant on a secluded beach prospered as Canadian rum runners under the cover of darkness and fog imported illegal whisky. The process involved moving the "booty" from ships to the beach. It also required getting it dragged up the steep hill. Often it was whisked into awaiting vehicles for transport to San Francisco. Some of the liquor made it into the garage beneath Frank's Place. Frank Torres used his political and social connections to operate a highly successful illegal business. Unlike other speakeasies along the coast, Frank's Place was never raided.

With the repeal of Prohibition in 1933 Frank Torres remained in the food service business as one of the most successful restaurateurs along San Mateo County's coastside Frank's Place, now called The Moss Beach Distillery, still retains its spectacular views and secluded location above the ocean coves.

The Distillery also retains one of Frank's former customers, as well as its resident ghost. The Blue Lady still haunts the premises trying to recapture the romance and excitement of Frank's speakeasy years. The story of The Blue Lady was documented by Unsolved Mysteries television program and has been seen by millions of people around the world.

The Blue Lady ghost was named for the color of clothing she used to wear when sneaking away to the restaurant to meet her lover, a piano player at the Distillery bar. While her husband and son kept the fire warm at home, The Blue Lady was supposedly wrapped in passion and madly in love with a man that she could not have. She died in a car accident and some speculate that she's searching for her lost love to this day.

Among the reported anomalies that lead staff to believe there's a ghost are levitating checkbooks, locked rooms from the inside without any means of entry and sightings by small children, especially. Like most establishments catering to tourists and local diners, the restaurant owners assure that the few pranks that occur are completely harmless, only lending to the ambience of this special place.