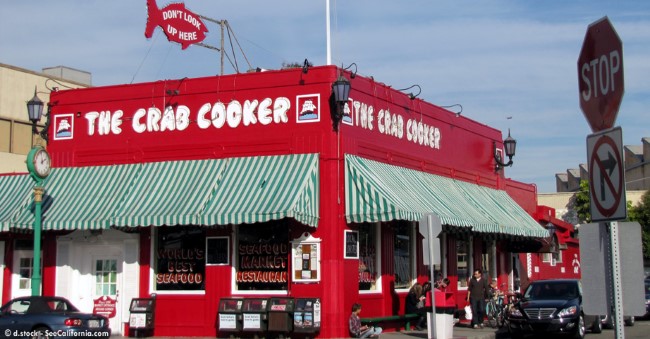 Newport Beach, Calif.--Look for a bright red builiding with a green & white striped awning on the Newport Peninsula. If you see a sign that says, "DON'T LOOK UP HERE", you have found the popular decades-old Crab Cooker restaurant in Newport Beach.

Like Chuck's Coffee Shop in Belmont Shore that claims it is Locally World Famous, Crab Cooker claims it has the best clam chowder in the world. Of course another place on the coast likes to think it's clam chowder is the world's best at The Splash Cafe in Pismo Beach. And it has a San Luis Obispo award to prove it is the best (in the county).

The truth is that clam chowder and seafood shanties are all about customer popularity. Crab Cooker wins on that account. Open daily, people line up in the late afternoon and weekends especially to eat at the casual cafe-style fish market. Fresh fish, smoked fish and shell fish are served for lunch & dinner daily. You can order dinner portions all day long, though you can't order lunch portions on Sunday or after 4:30 p.m. The lunch plate is approx. $4 cheaper than dinner, but includes the same great tastes.

Smoked and grilled preparations, Maryland Crab Cakes and the tourist favorite, scallops or shrimp on a skewer with bacon served as brochette with rice pilaf or romano potatoes and cole slaw begin at around $11 for lunch and $15 for dinner (subject to change.) The menu for lunch & dinner is simple--it is all fish entrees. Salmon, halibut (seasonally) and other fish can be ordered and eaten right there, or cut, wrapped and taken back to your place. The fish market invites people to drop by early and buy catch of the day to take back to their beachfront rentals and prepare themselves in a barbeque, an especially popular event on the 4th of July!

Clams & oysters served seasonally October through April,  and mussels in the half shell are served as appetizers, and there's a handy Blue Plate Special with a fish salad, bowl of chowder & cup of coffee under $10.

Beers on draft or in the bottle, wine, and sodas are served. And there's dessert--yummy cheesecake, keylime or strawberry, and chocolate offerings keep it simple and filling.

Fans of the popular restaurant can order logo shirts, mugs and other items through the company website, crabcooker.com

The Crab Cooker was launched in 1951 as Seafood Varieties but diners to Bob Roubian's restaurant only remembered the crab cookers inside and not the name. With natural progression, the Crab Cooker name was adopted.  Roubian had a passion for fresh fish, for cooking it just right, and for seeing diners get so much pleasure out of sharing the experience. His passion has survived close to 60 years and he's shared his love of fresh fish dining in two Crab Cooker restaurants in Orange County, Calif. Hundreds of thousands of diners have made Crab Cooker a tradition, much like the family vacation to the Newport Peninsula or Balboa Island.