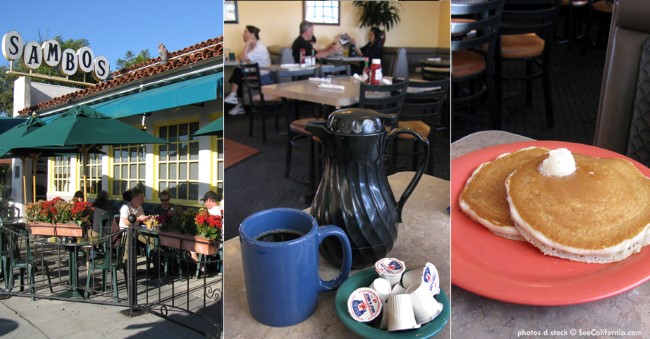 While many youngsters don't realize that Sambos used to be a chain of restaurants across the nation, one of the remain in originals sits beachside in Santa Barbara. Open daily till around 2 p.m., Sambos offer breakfast traditions and pancakes that folks return for once they've tried them. Hot coffee with a small insulated pot left at your table, real cream and a basket of small muffins with either blueberry bits or chocolate chips and real butter are part of the charms of Sambos. With outdoor patio tables and indoor booths that all overlook Stearns Wharf and the beach, this affordable breakfast cafe is one of our top choices for food, fun, sun and great prices in Santa Barbara, a beach vacation that's one of the best on the California Coast!

.. And then there was one, The Original Sambo's Restaurant. The Original Sambo's Restaurant is still family owned and operated by Chad Stevens, the grandson of the Founder of Sambo's Restaurant, along with his wife Michelle. They invite you to stop in and say hello. Over the years many myths and rumors abound about the "SAMBO'S" name - its origin seemingly subject to many ideas as to how the restaurant got its name. The fact is - SAM (the Founder) was a real person and BO (his partner) was a real person. Sam is Sam Battistone and Bo is Newell Bohnett, known affectionately to his friends, family and associates as "Bo". Despite all the other stories you may have heard - this is really how SAMBO'S got its name. 'The Story of Little Black Sambo' by Helen Bannerman was an afterthought. The SAMBO'S RESTAURANT already was established before the children's story was discovered and used as part of a marketing promotion. Sam actually had another restaurant on State St. in Santa Barbara called "Sammy's" when the original (and present) property location (216 W. Cabrillo Blvd) became available. From 1957 until around 1978, Sambo's was a growing part of the American landscape. For a number of reasons Sambo's began to slow down and its transition from an innovative coffee cafe in Santa Barbara to a multi-million dollar corporation began to take its toll - In August 1981 there were 1,117 restaurants in 47 states. Some restaurants in the Northeastern part of the U.S. tried a new name - ' No Place Like Sam's ' in an attempt to reverse a four-year tailspin. Sadly, in 1982 all but the original Sambo's in Santa Barbara closed their doors.